It's free app, which can combine cloud drives for Dropbox, Box, Google Docs, SkyDrive, SugarSync, FTP, etc, so that you can merge them together and centralize management. 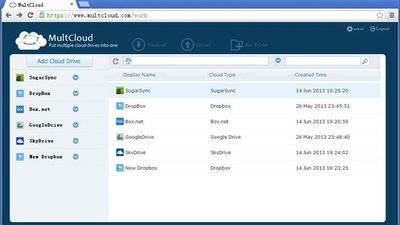 Our users have written 10 comments and reviews about MultCloud, and it has gotten 75 likes

MultCloud was added to AlternativeTo by jockerJ on and this page was last updated .

30GB per month for free accounts

It saves a whole lot of time and effort.

now it's just 30GB per month

Extremely slow even if you pay for it. Nowhere do they mention what their data transfer rates are, it’s all hidden. Only in the forums do you see the truth of how slow they are. People are getting less than a megabyte per second transfer rates even in the paid plans. Ok for consumers, not so much for bigger data transfer needs.

BEWARE, this company is a Chinese company, meaning that your DATA can be accessed by the CCP. I rather delete my account. They hide all that information so it took me time to find out. That is to begin, lack of corporate transparency.

I hate how I have to defend a very flawed piece of software but "they're Chinese!" does not speak to the merits of the software and frankly, is ignorant at best and racist at worst. If you can find who their parent company is (it's on their site, yes, even when you posted this, check archive.org), DNSDumpster and Cloudbleed would show that their servers are all "offshore" to a Chinese company and the direct operators of the service is a branch based in Singapore. I'm not saying that data privacy issues aren't real in China, but rather, it's not unique to China and just as American companies leverage Switzerland or BVI for privacy, America represents that to Chinese individuals. Companies like AWS work directly with the American government. Even Protonmail gave in to Swiss courts, acting in a manner that really damaged Swiss prestige and entirely voluntarily, in one of their requests for info from Europol. Do you post such warnings AWS, GC, GDrive, Rackspace, etc..'s reviews?

To simply insinuate that everyone in the country, 1.5+ billion people, are a monolith and the ruling party's policies are not only followed but followed obsequiously is really insulting. You may not hear about it, but the CCP puts out a lot of official statements that nobody follows. If there was a reason for them to get your data (and in that case, using any cloud storage is dumb), it's not necessarily easier to deal with the foreign branch located overseas compared to the domestic branch of a foreign companies that's down the street. All Chinese websites are required to register with the local police department and get a beian certificate that's placed at the bottom of the front page. The fact that they set up in a jurisdiction that allows them to evade that for their app says something, at least.

If you want to check out how Chinese operators foreign servers actually think, hostloc is the place. But imagine that the acts of every president whether you voted for them or not is aggregated in a way that discredits you based on your place of origin - you can't pick your place of birth, by the way, it's the one thing nobody has control over - and then read your comment. I worked with dissidents. They're not in the habit of using GDrive and suddenly needs to sync that to two Megas. And one doesn't stay a dissident for long if their opsec doesn't cover at least the basics.

Always worked for me, using it for more than a year. Its really a little bit slow, but i am a FREE USER! For a free user, its fast enough. There is no competition with that much transfer-credits.

Very convenient way to move files between Clouds! Worked great for me.