Mahou works completely different from other Layout Swtichers, it switches not by next layout, but by specified in settings layouts.
Even selected text switches just between selected layouts, though if you liked cycling through, starting from v1.0.2.9 there is Cycle Mode.
Mahou requires .Net 4.5 or greater to work properly. Begining from v1.4.3.9 error when running on .Net 4.0 were fixed.
Features

Especially it has useful snippets and Caps Lock layout switch for Windows.

Many functions and one-button language switching

One of the best keyboard layout switchers and, I think, the most customizable. You can customize practically each parameter of this layout switcher from it's decoration to behavior. Also the big advantage that program is open-source, so you can be sure, that it will not steal your passwords or any valuable information. Five stars and I personally declare that my quest for the best layout switcher is over, I found it!

Very needed application for cases when more than 2 languages installed. Windows built-it switcher is suxx. Unfortunately, number of features in Mahout, most of which are unneded for me, was prioritized over quality: program often hangs and glitches.

Similar program with only advanced keyborad switching capability would be appreciated.

Configuration UI is overloaded and feature-creep. Some feature implementations are pretty naive. I had it crashed silently few times.
But all in all it's the best we have so far for layout switching in Windows.

2020 update: It started to give me headaches with spurious layout switches when switching between apps.
Since the only feature I use constantly is the layout switching on Caps Lock, and I removed any layouts besides the two I need the most, I settled upon finding a replacement that would just do the layout switch on Caps Lock for me. Looks like there is no stable application specific for the task, but I realized the new Microsoft PowerToys offer a quality key remapping tool. So I will go with that for now. 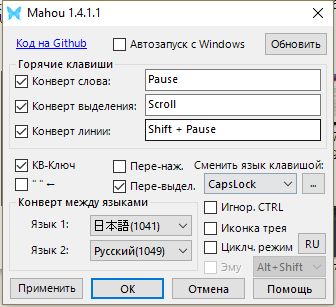 Our users have written 7 comments and reviews about Mahou, and it has gotten 33 likes