And I am not a fan of that overrated mainstream band Slipknot, just so you know. I listen to Dream Theater, Iron Maiden, and -- shame on me -- old Metallica.

TL;DR
Not bad -> Top rated metal album is not your average, everyday metal -> It is damn epic, but not Dream Theater epic, of course -> jamendo rules.

They don't pay money to the author for 4 month, so pay attention, support just promise and promise but nothing happening, withdrawals still not processed.

Hate when searching for #ambient or #post-rock the only thing I found are songs with that name but not that kind of music. I long time ago I used it to find some music for my video projects but if they do not improve that mess I will be not using it ever.

I've been aware of Jamendo since 2008. In my experience, when one long awaited feature is gained, 1 or 2 other great features were killed. :-/ Now I'm more interested in whether those features that Jamendo had, has, and should have, can be found in competitor sites that offer the same service (Creative Commons music distribution).

Back when I first used Jamendo, you could buy CDs to directly support artists while getting something physical in return. (Btw, CDs still make for really good birthday/christmas presents even in a world of downloads; downloads do not make good presents since they can't be wrapped and given personally! And unlike the vast majority of downloads, CDs are a lossless format, so can easily be converted to full quality FLACs with no loss of quality!) Also, bittorrent downloads for both OGG and MP3 format were readily available, allowing for fast, efficient, reliable downloads and the ability to donate upload capacity for seeding. These features were a real plus for me, but the amount of good music was lacking and you had to really dig for it. So great site, great CD option, but lacking much decent music.

At some point torrents and the OGG download option disappeared from their site. Music was constantly improving but was still fairly limited. So improving music but deteriorating site.

A while later I noticed a (the) Jamendo Android app on F-Droid. It crashed a lot at that time but it was early days for the app. It was a welcome addition. It brought back readily available OGG downloads (via an option), but not torrents. I was disappointed that the website still made heavy use of Flash, despite HTML5 being well on the scene by now. I was surprised to see a site so often mentioned in the Free/Open-Source world lagging so far behind on HTML5 uptake. So nice app, but what the heck happened to the site!

Finally! The site has a HTML5 player and so does not require plug-ins! It needs nothing more than a decent browser such as Firefox. Ooh, and there's quite a bit of really good music on there now! But... what happened to the option to buy CDs?! Gone! Now that there is enough great music that I can easily find good presents for family and friends who like music, I can no longer order CDs! And that also rules out the only cheap way of obtaining FLACs (I found out that tracks can be obtained in FLAC format through Jamendo Pro for 125€... per track!! ..but seriously, I'm not doing that, I don't need a license to make 5000 copies!). So a fair bit of good music now, but the only affordable, full-quality, lossless distribution format has gone!

So, what will happen first: Jamendo relaunches CD sales, or starts offering FLAC for free; or a competitor does it instead? 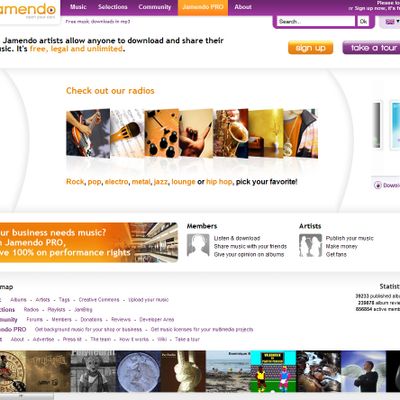 Our users have written 4 comments and reviews about Jamendo, and it has gotten 156 likes