Make lets you design, build, and automate anything - from tasks and workflows to apps and systems - in a few clicks.

Integrate all your tools and manage your processes in one single platform. Choose from thousands of ready-made app integrations or connect to any online app with our powerful no-code tools. 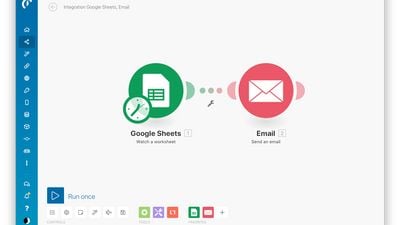 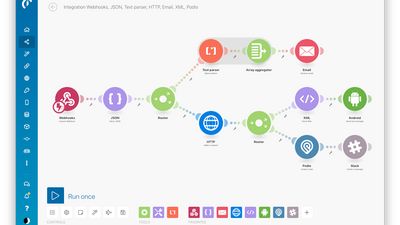 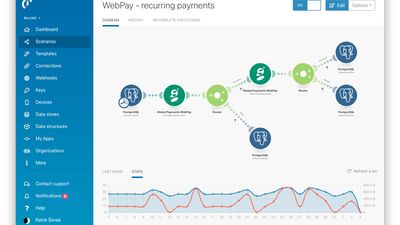 Our users have written 4 comments and reviews about Make.com, and it has gotten 54 likes

Make.com was added to AlternativeTo by patrikimek on and this page was last updated . Make.com is sometimes referred to as Integromat, Make.

I left this comment at the Integromat's YouTube channel, so I thought I should also leave it here, since I describe my experience with Integromat's competitors, while trying to find solution for a particular automation : Google Sheets / Gmail .

I needed to set up a new automation, to integrate Google Sheets with Gmail. I've used the Zapier's free plan for similar tasks, but I found that the free plan offers a very low number of automation runs . I think it's only 100 per month - you need to do some digging to actually find this out - this is NOT mentioned on the Zapier's 'Plans and Pricing' page . I learned about this limit after I started receiving email messages from Zapier, that my 'zaps' were getting close to my plan's limit for the month. This could have / should have been made clear from the start, me thinks.

Zapier's first paid plan is U$20 / month, which I thought is a big jump, if your needs are very close to the free plan's limits.

So I started looking for alternatives.

First I tried IFTTT.com. It is free, I guess - no clear indication on the prices, and it has a lot of - what I would call a 'push-button' automations. The one I needed : Gmail + Google Sheets was horrible indeed. The content of all the fields was auto-populated in the sheet's title, it wasn't clear how I would assign an existing sheet, etc. Overall - IFTTT.com, at least for this application - felt more like a toy, rather than a business-grade tool.

Then I tried, and I had high hopes for Microsoft Flow. They also have a free plan, of 750 runs / month, and the paid plan is a very reasonable $5/ month, for a much higher number of runs. HOWEVER, my hopes were brutally squashed, once again. While it is a more serious tool ( albeit rather 'stiff' interface and terminology ), it just wasn't doing it right. It populated the Google Sheets with fields from Gmail emails, alright - but it included the HTML tags to the email's 'Body', with all the divs, styles, etc etc. Perhaps there is a filter or a function to remove these, but - for this particular application, which is to just get the DATA, without concern for the presentation, the HTML tags should be removed by default. Very disappointing. Whoever did the coding for this 'flow' - did a half-ass job indeed.

Integromat - on the other hand, handled the job beautifully, and it provided a lot more ( meaningful ) options for automation.

At this point, I'm still not clear, however - what is the strange limit of 1MB, for something called 'internal memory' ( it might be called something else ), on the free plan. Not sure what this mean, EXACTLY.

I just hope that it doesn't turn out AGAIN, that there is a blunt bat, hiding in the dark, which will clobber the unsuspecting user ...

For now, my sense is that Integromat was built as a solid business tool, and I wish them all the best. I give them 4 stars out of 5, because there is always a room for improvement. But it really should be 4.5 stars.

I love this feature 👉 HTTP Request, the best of all alternatives.

Be very careful with this service. They seek full permission to delete your gmail emails permanently. I've contacted the Company consistently and they were unable to fix this issue. Why would anyone give a permission like that when most automation needs are Read Only. Even Zapier gets Read Only access. Unsafe service and non compliant to make it more secure. 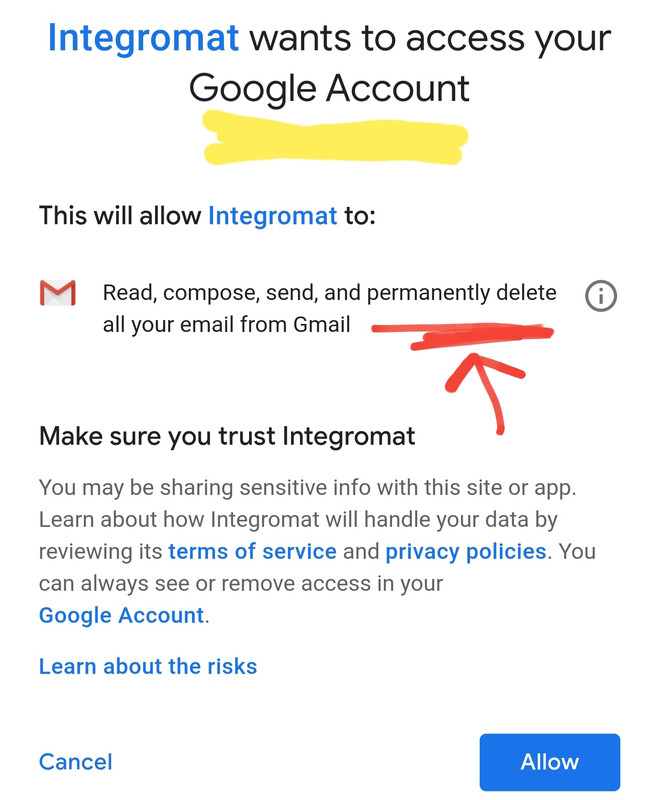 I know this comment is 3 years old, but that's simply how "developing an app" looks like for Google as example. You can only give it one set of permissions that, in case you need them, are there.

Nice Interface, cheaper than zappier and as powerful. I only have two criticisms: