What is Movie Collector?

I have been a long-time user and customer of Collectorz software (Game, Music and Movie), I probably purchased my first license around 10 years ago. I was always very happy with the functionality, support and value for money.

However, Collectorz recently (and quite silently) switched their licensing model for the desktop and mobile apps from an "update subscription" model to a pure subscription model. And with this, sadly, they have lost me as a customer and user, and made me start looking into alternatives.

The difference might seem small, but I don't think it is. Before, you would receive updates for as long as you paid your subscription fee, but could still keep using your then-current version if your subscription ran out. In other words, your license to just use the software wasn't expired retroactively. Now, you will apparently get completely shut out of the software unless you keep the subscription payments up.

While I do understand their argument that they also provide online services which cost them money (the cloud storage for your collection, and data from their media databases), it doesn't really matter to me since I was only interested in the offline functionality of the software. In theory, it should have been simple to just tie access to cloud storage and databases to an ongoing subscription, without deactivating local licenses. But maybe my personal preference to store my own data locally, and keep control over it, is so outdated and passé by this point that it wouldn't have made sense to implement it that way for me and the two other people who feel that way.

It's not even that it makes a difference to me financially, because I've pretty much had a permanent update subscription to all three tools I use for many years now. But it's a matter of principle, and it just doesn't feel right anymore.

What's maybe even worse is that this new subscription model still ties licenses to machines, not to users. Meaning that if, for example, you have a desktop and a laptop computer, you're not allowed to install the software on both, even if you're the only user and you never use them at the same time. Ironically, this also makes a prominently advertised feature of their online services – the ability to sync databases between machines through their cloud storage – pretty pointless.

Even with all the sympathy I have built for Collectorz over the years, this is unfortunately the end of my Clz story. With a tear in my eye, my remaining months of subscription (and yes, I'm aware that my old licenses are "grandfathered") won't be spent actually using the software anymore, since I'd rather spend that time looking ahead and finding new solutions.

Try Filmotech
They have all the features you are looking for.
They have PC, IOS, Android support
You can export to your phone or pad.
And the help on their Forum is awesome! 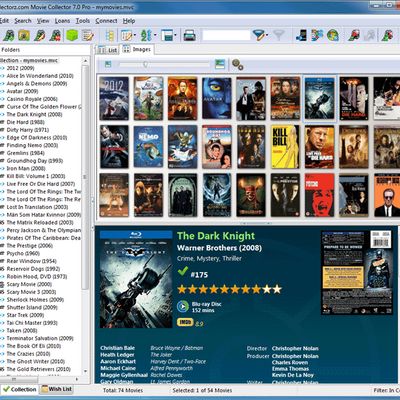 Our users have written 1 comments and reviews about Movie Collector, and it has gotten 18 likes