What is ProtonMail Bridge?

ProtonMail Bridge is an application for paid users of

Proton Mail that runs on your computer in the background and seamlessly encrypts and decrypts your mail as it enters and leaves your computer. It allows for full integration of your ProtonMail account with any program that supports IMAP and SMTP such as

Protonmail have done a lot to promote online privacy. They have done this by developing an email service intended to challenge the likes of Gmail and other "free" online services that violate the privacy of their users. They are not the only company to do this, but they should be praised for pursuing a laudable goal, making more people privacy-aware and for providing a viable way to protect privacy.

However, their team leave many unanswered questions on their forum, so here are some answers specifically in relation to Bridge. In the interest of full disclosure: I don't work for or have any connection to Protonmail, other than that I am a paying customer.

What is bridge? Ordinary emails (e.g. Gmail) travel through the internet in plain text. This means that they can be intercepted and read, for example by the owners of servers through which those emails pass, or by government agencies able to subpoena the email service. It's a huge privacy problem for your communication because it amounts to being spied on, all the time. There exist solutions to this based on encryption. However, for many years only technical users were inclined to use these solutions because they were difficult to implement. Protonmail is one of several companies (others include Tutanota and Countermail) that make encrypted email communication more user friendly. Of these, Protonmail have made the greatest advances in popularizing the use of encrypted emails. Many people would like to use their emails not via a web client, but via a local (installed on your computer) email client, such as Mozilla's Thunderbird (or similar). Also, encrypted emails have encrypted email text, which means they can't be searched - a problem for companies like Protonmail. Bridge is a piece of software by Protonmail. It addresses some of these issues. Specifically, it allows the user to connect email clients like Thunderbird (though not only) to their Protonmail account in a way that makes it possible to download emails to the user's computer and let them sit there, unencrypted and even search them in a way that is not possible via the browser. (Or, strictly speaking, a way which is possible via the browser, but which Protonmail haven't yet implemented via the browser.) Because of this, it also allows you to backup your Protonmail emails, which is otherwise a missing option.

Who can use Bridge? Protonmail currently offers Bridge to paying customers only (you have to be a paying subscriber to at least their Plus plan). The software is available for:

Which distibutions of Linux is supported? At the time of writing (2018-07-07), the Bridge team emailed out links to .deb and .rpm versions of the Bridge software. .deb files are good for Debian, Ubuntu, Mint, Kubuntu and any other Debian or Ubuntu-based Linux distributions. .rpm files are used by Fedora, RedHat and OpenSuse Linux distributions and their derivatives. This is fair, because these are the most popular distributions out there.

However, along with the email, come instructions on how to adapt the .deb files to other Linux distributions by extracting the executable files. This is, in my opinion, beyond the capability of most non-technical users, but it's - overall - not a very difficult thing to do with a bit of focus and will.

Additionally, Arch, Manjaro, Antergos, and other Arch-based distributions are catered to in a sense because the Arch User Repository (AUR) has a user-supported version of Bridge, which is simply re-packaged from the .deb file. I tested it earlier today on Manjaro and it works well.

IMPORTANT: Do not use your Protonmail account password for configuring Bridge. Allow Bridge access to your account. Once this is done, Bridge will give you a new, Bridge-specific password. Use this to give to your email client (e.g. Thunderbird). The email client (e.g. Thunderbird) is told to connect not to your email account directly, but to Bridge. And Bridge does all the hard work in the background, decrypting and encrypting emails as they move in and out of your computer.

Of these Tutanota offer the best deal because they have a usable search (better than Protonmail's) via the browser, which even searches email body text. So you wouldn't need something like Bridge with them for search. If you want to export your emails from Tutanota, this is also possible. However, it's a little less sophisticated. You go into the web client, highlight your emails of interest (by holding shift or control and then arrows) and selecting "export" from a menu. They then appear as .eml files in your Downloads folder.

Countermail is configurable to work with Thunderbird via Thunderbird's add-ons for PGP.

Verdict Bridge works well for what it is supposed to be: a connection between the secure and private world of online, PGP-encrypted emails and the usable, searchable world of local clients.

It could be implemented better. For example, instead of offering .deb and .rpm files, Protonmail should really offer a Flatpak version, which solves the problem for every Linux distro. But of course Bridge is also for Windows* and Mac users, and so that particular concern is going to affect only a minority of users.

Overall, Bridge does what it says on the tin and I'm glad it's out there. In the future Protonmail should aim to develop a search function similar to Tutanota's so that emails are searchable in the browser directly.

*Windows privacy is a nightmare of indescribable proportions for reasons I put in my Windows review. (See here and scroll down a lot to find it:

Windows 10) Using Protonmail with Windows is like trying to bail water out of a sinking ship with a sieve. In principle, it can be done, but you don't want to live in principle. What you really need is another boat.

An excellent tool for using Proton Mail with a desktop email client.

The Bridge does not work well with Thunderbird IMAP folders: deleting or moving ends up duplicating mails, not moving, etc... Frustrating, i bought Protonmail for 2 years, and the Brdige is still a mess to the point i do not use the account I paid for.

They should rewrite it from scratch and make the folders work properly, like on GMail IMAP. Using the webapp is not an option for me, i have many mail accounts and I like to move old mails to the local folders to save space.

If they fixed this buggy application ProtonMail would be perfect, but time passes and nothing gets fixed, I will have to find an alternative :(

> The ProtonMail Bridge is an application for paid users 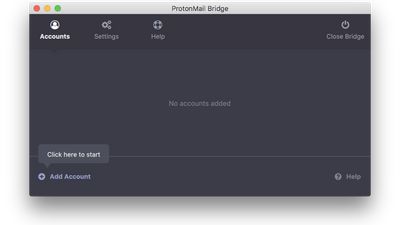 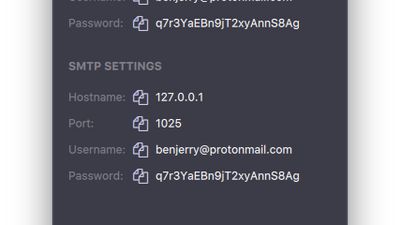 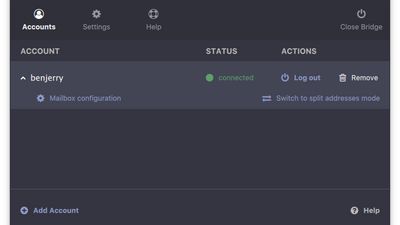 Our users have written 4 comments and reviews about ProtonMail Bridge, and it has gotten 7 likes

View all
ProtonMail Bridge was added to AlternativeTo by JohnFastman on and this page was last updated .