Great application, however, it hasn't been maintained for over 10 years now!

The 'Pro' version is better in that it shows you a preview of the file under the list of files, allowing you to open each found file in a new tab and browse the section where the text search was found.

One major disadvantage is not being able to exclude directories or folder locations, and the UI/UX isn't entirely intuitive, such as not telling you that file types need to be separated by a space.

Another nice-to-have feature would have been a highlight option such that the lines where the matched text string was found are auto highlighted, rather than manually setting custom strings every time in the 'highlighting' panel.

Unfortunately not sure what has happened to the author, after emailing a couple of times about possibility of buying the 'pro' version, never received a reply. 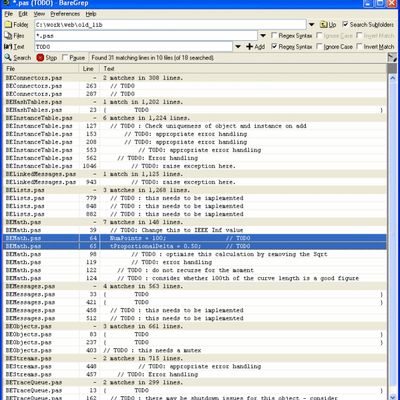 Our users have written 1 comments and reviews about BareGrep, and it has gotten 12 likes