c#/csharp IRC CLient. AdiIRC stores all its settings in text files, this way you can grab the adiirc folder and put in on a usb device or external harddrive. Take all your settings and servers with you everywhere!
Show full description ▾

AdiIRC, currently on version 1.9.3 Stable (1.9.4 Beta) is, IMO, the greatest alternative to mIRC, I use mIRC since the 90's, it was an awesome IRC Client (since it was basically the ONE IRC Client that most people used in those days lol), but just like everything, it got old.... and boring... Yes you can change its theme, some new colors, new background images, stuff like that, but it still is mIRC, and I got tired of it, needed something new, something fresh...

I've tried various IRC Clients, but most of them lacked something, MSL (Mirc Scripting Language) support and of course, since I was a huge fan of NoNameScript (which might be known to some of you) I had some trouble finding an IRC client similar to NNS.

I like to play with MSL just for the lulz, eventually I found AdiIRC, I started using version 1.9.1 (if I correctly remember) and one of the things that I've noticed right at the beggining, was, how easy it was to configure it, or to have it ready to work, as simple as cutting bread, really!!! I know that most of the people find it difficult to work with IRC clients (specially mIRC, been there too... lol) with AdiIRC all you have to do is, open AdiIRC, a window will pop-up AKA Quick Connect, just fill in the fields with your information.

Nick (the name you will use), Alternative Nick (if chosen Nick is already in use, it will switch to this one), UserNick and RealName (these are optional, don't bother with these if you don't want to), Server (if you don't know where to go, just connect to the preset server, from there, all you have to do is ask about other servers), Port (default is 6667, but if you want to be more secure, just set it to 6697, yes, it supports SSL) and last, Channels (the default channel on Quick Connect is #AdiIRC (in case you don't know, channels in IRC have a unique identifier, which is the #, yes, IRC uses Hashtags long before twitter :P, so if you are in a channel and you type #Something that word will be functioning as shortcut to Channel Something), do you think this is a little bit confusing for you? Too much text? No problem, here's a pricture

Does it look that confusing, does it? That's right... It's as simple as that (if you don't have a clue to how difficult can be with mIRC, just compare both Clients, and you'll notice the difference, trust me, been there too...lol

Also, AdiIRC supports mIRC Themes, that's right, if you're a mIRC user, with a specific theme you like, you can test it on AdiIRC and see if it works, just as a warning, some Themes might not work with Adi, but most of them do work.

The same goes for Scripts/Snippets, AdiIRC has a pretty good support for mIRC snippets, some might not work, and some might, but as time goes by, the MSL support in AdiIRC gets better and better.

AdiIRC (despite having an installer) it's fully portable, even if you used the Installer presented at its website, all of its file are stored in its folder, so if you want to back it up, just copy AdiIRC folder, and that's it!

So, as my final statement, if you want a pretty good alternative to mIRC, try AdiIRC, you wont regret it, I know it may be difficult at the beggining, adaptation can be hard, been there also, but you will manage to adapt with ease.

AdiIRC, what else can you ask for?

Said about AdiIRC as an alternative

Hexchat crashes and have some bugs. also AdiIRC has a portable version
Positive comment • about 5 years ago • as an alternative to 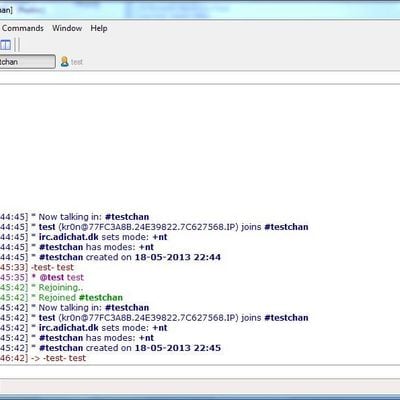 Our users have written 1 comments and reviews about AdiIRC, and it has gotten 28 likes