HexChat is a fork of XChat with bug fixes and new features.

...
HexChat info, screenshots & reviewsAlternatives to HexChat
HexChat is an IRC client based on

XChat for Linux , but unlike XChat it’s completely free for both Windows and Unix-like systems.
HexChat was originally called XChat-WDK which in turn was a successor of freakschat.

I've used xchat2, the silverex build, the "official" build.. this is the best build for windows so far. But, it still has TONS of bugs (current git count is around 200) and the devs can barely keep up with "urgent security updates" much less making config files consistently read and write well.

But it's soooo buggy. Internet connection having issues? Crashes. SSL problems? Crashes. (it still doesn't do good SSL!) connected to a bouncer? Crashes.

It's not perfect. It's okay.

I use it in Linux Mint and I haven't been disappointed by it. It has options like word highlighting, user name highlighting etc. The overall look is also good. It can also be minimized to tray. 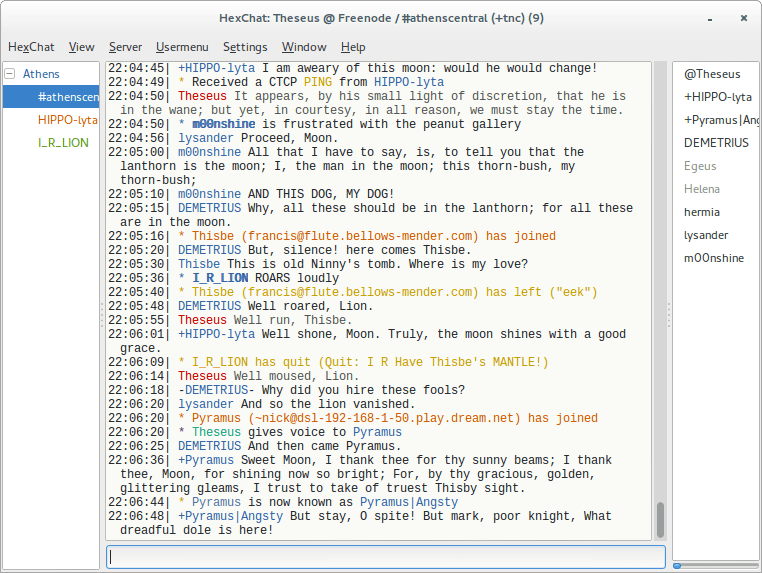 Because is the best alternative to chatzilla

Mac: https://github.com/philicious/hexchat/releases/tag/2.12.4
Windows: All version after 2.9.4 are Windows Vista+ only
MacPorts: Requires XQuarts

Free tools (Software that can help you mostly in any field)

Open/Free soft must have

Our users have written 5 comments and reviews about HexChat, and it has gotten 199 likes

View all
HexChat was added to AlternativeTo by TheWeirdo on Oct 12, 2010 and this page was last updated Nov 18, 2020. HexChat is sometimes referred to as XChat-WDK, XChat WDK.