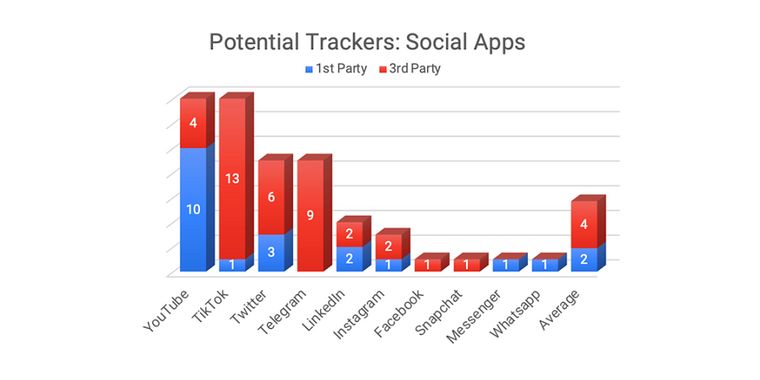 According to research firm Pure Oxygen Labs, TikTok uses behavioral data tracking and sends it to third parties more than any other social media app.

In an analysis across 200 apps on Apple's iOS, despite its latest major release providing major consumer-aiding privacy renovations, plenty of third party apps and services still capture plenty of user data and share it with third party firms. This data was separated by category, with social media apps being listed and compared with one another.

The data shows the following:
• "[Social media] apps averaged 6 contacts - 60% to 3rd party networks, 40% to 1st party networks"
• YouTube and TikTok tied with the most tracking domains contacted per user at 14. Of those, 10 were first party Alphabet owned for YouTube and 4 of them were for third parties outside of Alphabet's control. TikTok, however, had only 1 first party tracking domain, with all 13 others belonging to third party companies.

What data is being shared and how it is being utilized by these third parties isn't always clear, and this fact can drive users to look for more privacy respecting alternative services. In this case, you're in the right place.

TikTok is a short-video social platform powered by music. Designed for the new generation of creators, TikTok allows...