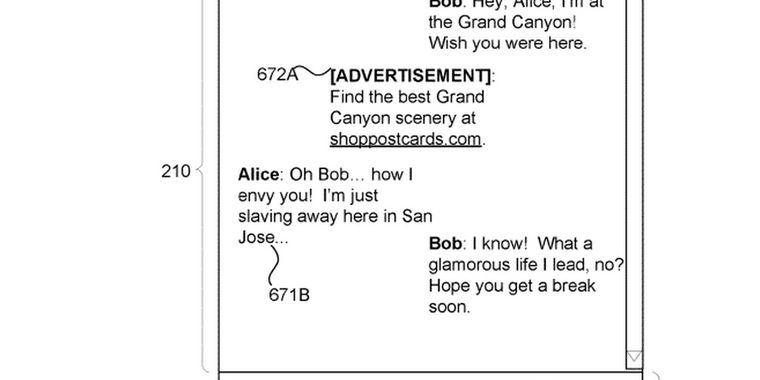 If you use Facebook's Messenger chat service to direct message your friends and family that are also on the social network giant, you may soon have to deal with some advertising interspersed with your private, one-on-one conversations. A patent was published on Thursday, August 1st to show how it works.

Facebook Messenger DMs would also enable users to utilize conveniences such as ride sharing services and multiplayer games directly within chats. Though some examples of these are already available on Messenger direct messages, would be unified in its approach alongside this data parsing for advertising.

The patent has the name of Messenger's engineering director on file, showing that it is at least one of the ways that Facebook has been looking into incorporating advertising into one of its most popular services. That said, a Facebook spokesperson gave the following statement to Mashable concerning the patent:

“We often seek patents for technology we never implement, and patent applications - like this one that was filed over four years ago - should not be taken as an indication of future plans. We don’t have any plans to place ads in conversations between people.”

Telegram. If you would prefer to use a Facebook operated messaging service,

WhatsApp is end-to-end encrypted and arguably the most popular messaging service in the world, though it is also closed source, which means that you nor anyone else outside of Facebook can audit the code for integrity and security.

Facebook has not made any formal announcements concerning implementing advertisements within any of its messaging services outside of the spokesperson comment given to Mashable.

Facebook Messenger is a faster way to message. Reach friends right on their phones, get and send messages fast, message everyone at once and more.