Yamdu is a web app which combines individual tools for all specialist areas and all phases of your film production.
Show full description ▾

Yamdu is an incredible tool which covers pretty much everything related to film production management.

I was a bit unsure of where to begin as there are a lot of different functions. I had tried a couple of similar programs previously but found that the feature set was pretty thin or focused all in one area of production - Yamdu covers a lot more ground, which was a bit daunting at the start. I quickly got the hang of it, though.

I use the Production Calendar to plot out production steps precisely so that I'm always aware of the timescale I'm working with - the automatically-generated Gantt chart makes this easy for my team to follow.

The script breakdown is incredible as I can just import my final draft file and Yamdu builds a breakdown for me to populate that is intuitive in the way it funnels information to the people who need to see it. I can also tag the script to build up my breakdown which is a big timesaver. All of that info is also used for the call sheets which are again automatically populated with information which makes my life a lot easier.

It's also a big plus that everyone in the crew can communicate within the system (for tasks and announcements and in all the various departments) so that the need to send a lot of emails and whatsapp messages is pretty much eliminated.

Pros
Covers basically everything.
Highly intuitive (once you get the hang of it).
The scheduling tools are incredible.
Task management is very well managed.
You can communicate easily with the whole crew of groups of people.

Cons
The feature set seemed a bit imposing at first but after a while it all makes sense and is easy to navigate.
The interface was pretty dark before I realised I could change it to a bright one instead.

Conclusion
I would highly recommend Yamdu to anyone looking for one program to manage all aspects of film production.

I was part of a production that used Yamdu about a year ago and was amazed about the level of detail, Yamdu offers you to organize film projects. I've since been using with my own projects (a couple of commercials and image films) and am still very happy with how more efficient I'm working now. Also, their customer support is really good. 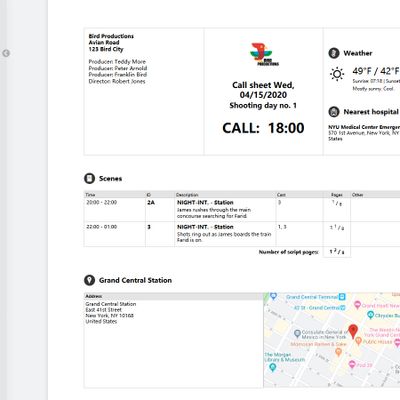 Our users have written 2 comments and reviews about Yamdu, and it has gotten 4 likes