[TrueCrypt is not exactly "Open Source", but the source is available. See the reviews to get more information.]

TrueCrypt is a disk encryption software for Windows Vista/XP, Mac OS X, and Linux. Creates a virtual encrypted disk within a file and mounts it as a real disk.

Encrypts an entire partition or storage device such as USB flash drive or hard drive.

Encrypts a partition or drive where Windows is installed (pre-boot authentication).

Parallelization and pipelining allow data to be read and written as fast as if the drive was not encrypted.

Encryption can be hardware-accelerated on modern processors.

Provides plausible deniability, in case an adversary forces you to reveal the password: 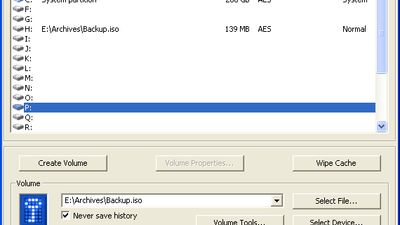 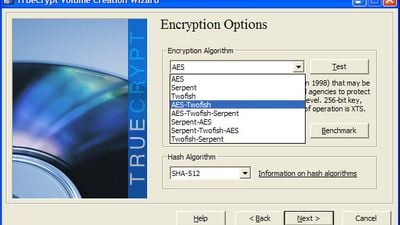 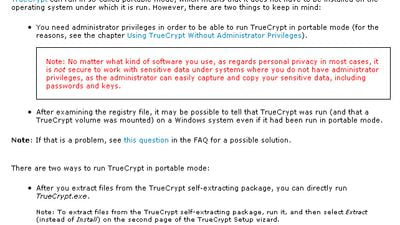 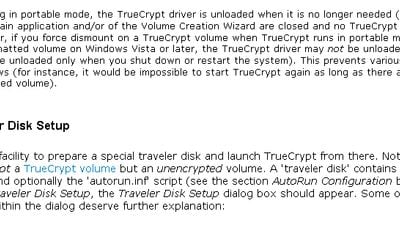 Our users have written 12 comments and reviews about TrueCrypt, and it has gotten 860 likes

TrueCrypt was added to AlternativeTo by sublime46 on and this page was last updated .

See below for more info.

Truecrypt is Secure - It Has Passed the Final Audit

The disk encryption software Truecrypt, a popular tool that was endorsed by Edward Snowden, has passed a full source code security audit. This comes on the heels of the developers of the app mysteriously quitting the project and recommending that people use a questionable Microsoft solution.

The initial audit of the bootloader was performed by iSec who found only minor issues with the software that would not compromise security. The full report of the phase I audit is here: https://opencryptoaudit.org/reports/iSec_Final_Open_Crypto_Audit_Project_TrueCrypt_Security_Assessment.pdf

The phase II audit was completed by NCC. The full report can be read here: https://opencryptoaudit.org/reports/TrueCrypt_Phase_II_NCC_OCAP_final.pdf

This is the best encryption software I've ever seen, out of a dozen of encryption software I've tried. Finding this application was a real stroke of luck (Thanks to alternativeTo). With a novice-friendly interface and explanatory wizard it provides a great way to encrypt existing partitions/drives and to create new encrypted file containers. A TrueCrypt file container can function as an ordinary volume by mounting it as a virtual disk and the concept of hidden volumes takes data security to a whole new level. On-the-fly encryption provides access to the data while keeping it encrypted at the physical level. If there were a rating system here, I would give it 5 out of 5.

Truecrypt is depracated. Veracrypt has inherited the code, added new functionality and improved security. Don't use Truecrypt, use Veracrypt; it's still open source, free and every bit as useful.

Truecrypt did pass a security audit, but since then vulnerabilities have been found. VeraCrypt, which also open source, has taken on the TrueCrypt code and improved it, including in terms of security. VeraCrypt is backwards compatible with TrueCrypt containers. You should use VeraCrypt from now on, and convert your containers to the VeraCrypt format.

You can actually mount Truecrypt volumes in Linux without installing it, but with help of cryptsetup. Mounting an NTFS partition would go something like this:

Then when you're done with it:

Pretty easy, if you know how. ;) Of course, you need to replace the devices and mount points with your own values.

As of May 2014 TrueCrypt is no longer supported or maintained. You can read all about it on Wikipedia: http://en.wikipedia.org/wiki/TrueCrypt

The official website recommends switching to use existing encryption methods built-in with most modern operating systems. In view of this the final release will only allow you to decrypt your old TrueCrypt volumes in order to migrate to other encryption tools.

However there is a large number in the open source community with an interest in continuing the tools development under a new name and license in the near future. In the mean time the most recent full-featured version (7.1a) has been made available on various 3rd party sites and GitHub: https://www.grc.com/misc/truecrypt/truecrypt.htm https://github.com/AuditProject/truecrypt-verified-mirror

Yes, TrueCrypt 7.1a works perfectly without backdoors. But do not trust TrueCrypt 7.2 as suspicion arose that 7.2 version's setup looks after the earier 7.1a version's setup.exe file and modifies (infects) it with a backdoor. Available checksums' trustability is also questionable as the related websites' archives are all deleted (and present content could be modified too). So one can only trust TrueCrypt 7.1a burned to CD/DVD before 2014, or program version that can be verified by a checksum from a file that had written to DVD before 2014. (Although REAL write time of a DVD is also known by only the person who has done it.)

The TrueCrypt software is under a poor license, which is not only non-free, but has the potential to be actively dangerous to end users or distributors who agree to it, opening them to possible legal action even if they abide by all of the licensing terms, depending on the intent of the upstream copyright holder.

This is indeed true as it states in the [licence][lic] (Section VI.2):

A more detailed breakdown summation of the licence can be found here: [FreeDesktop.org - TrueCrypt licensing concern.][3]