TreeDBNotes stores and represents your information in a comfortable and clear tree-structured form. Each node in such 'tree' represents associated note, so you can store a lot of mostly independent notes in one notebook. With any note you can perform main Wordpad-like text-formatting functions (font and paragraph styles).

The official website is no longer available. The program was not updated since September 2015.

I came to look at TreeDB based on the screen shot - I wanted something that had a more visual tree representation, rather than heaps of same same looking notes that are hard to locate quickly. It certainly has that, the note titles have great formating and icon options - including adding your own.
Gave it a go because I did want a not-too-fancy all rounder and dpaner's comment said pretty much that.

The capabilities are far more than I expected in a lot of ways.
The fantastically customisable toolbars made all the diff. Mainly because under customise, most of the commands and shortcuts are there together in one place so it was a quick way to learn what it could do. Secondly I could put what I used a lot front and centre. The toolbars are also floatable and dockable, which I didn't expect. There are two toolbar sections, formatting in the actual edit pane and the regular top bars. My current app doesn't have that and I like this separation.

I also downloaded some of the RVFs for quick formatting options and found a couple of really useful ideas. Particularly one called writer tool in which the main text body is surrounded by a frame of adjustable formattable subframes to hold all sorts of snipits of info, pics etc. This I've used as is as a hold-all one pager, and also to work out the structure for other full trees, or separate DBs by getting stuff organised and seeing just what I've got at a glance. It's been really helpful to gather entire projects together. Kinda jumped ahead of myself there, as I haven't fully got a handle on some more basic functions but got me up and running quicker and made itself useful in a practical way pretty quick in the meantime. http://www.mytreedb.com/downloads.html has a collection of RVFs, skins addons etc.

Still exploring, but I'm glad I persisted beyond the initial sighs. Just been coming at it from the wrong angle based on how I used previous notefiles. Getting there ... finding it quite easy actually and so far pretty much been able to solve everything I couldn't work out at first. Has a nice little thing that puts the last used function on the file menu for quick repeat I guess, but really it's been great for knowing what the heck I just did and should or shouldn't do next time during this fumbling working it through phase.

Already thinking about upgrading to paid version if it keeps proving itself. That'd be a first after only a week or so. Interested in OLE objects, mainly spreadsheets that I need to recalculate often which the free version doesn't handle, but it does do a pretty nice job of manually editable tables as is.

Tried plenty of heirachical notefiles, all either too bloated and complicated or too simplistic and lightweight. So far Jot+ has been the best for what I wanted. TreeDB is more customisable and complex but not too much so. Might keep both. We'll see.

I ditto dpaner, give it a test drive - it's free. (which is always a pretty good price!)

Home page is gone.
In Sep-2019 I wanted to trial [TreeDBNotes] but discovered all links from the home page were dead. Could not be found (timed out)
Today those URLs land on
»» Can not connect to database. Please check you DB settings.

You cannot pay for TreeDBNotes, because the devrs link results is...
»» Can not connect to database. Please check you(r) DB settings.

There is no Free edition either, it was not available in Sep-2015, nor can I find any trace now.

There are dLoads of PRO from softpedia but no guarantee when a trial period finishes that TreeDBNotes will continue to work.

Many useful functions for free software. I like table editor in this program. I wait for the new free version 4.

I'm trying to like it myself, though I'm finding that I just can't warm up to using it at a business level. Part of it is that the UI is not only complex, but also it's somewhat rough. It's functional, no question, but it isn't exactly easy on the eyes and some of the more common options, like deleting notes, is found in context menus without obvious shortcuts.

Another part of my hesitance to go full forward is that it really tries to do everything you might want it to do. And - it seems to do most things fairly well, but like the ol' expression goes: "jack of all trades, master of none", you won't find it to be best-of-breed in any one area.

Very capable tool. Probably more stuff in it than you'll use. It doesn't feel like a vibrant, growing product; probably because it's been built out as much as it has.

Hi dpaner, thanks for the review,I didn't mind what you said about the jack of all, kinda what I was looking for so I did give it a test drive as suggested. Just wanted to say, your comment about "...more common options, like deleting notes, is found in context menus without obvious shortcuts." Yeah, you are right. BUT to my relief I found it has a customisable toolbar set up. I'm going to write a review and I'll point this out because it was one of the things that put me off at on first try.

Reply written over 10 years ago

i have treedbnotes 4.25 in to computers in my office what i want to know is how can i synchronize the two of them so they always have the same info? someone help

Reply written over 8 years ago 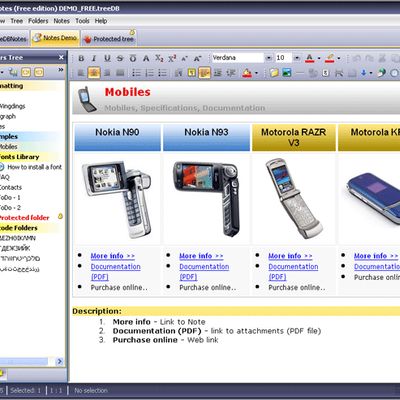 Our users have written 4 comments and reviews about TreeDBNotes, and it has gotten 37 likes

View all
TreeDBNotes was added to AlternativeTo by manwithcake on Nov 5, 2009 and this page was last updated Jan 25, 2022.