What is The Intercept?

The Intercept is dedicated to producing fearless, adversarial journalism. We believe journalism should bring transparency and accountability to powerful governmental and corporate institutions, and our journalists have the editorial freedom and legal support to pursue this mission.

The Intercept is serious about protecting our sources. With our SecureDrop server (https://theintercept.com/securedrop/), you can share messages and files with our journalists in a way that should help you remain secure and anonymous, even from us, if that is your preference. Messages and files that you send to us will be encrypted. For more detailed operational security advice, read How to Leak to The Intercept (https://theintercept.com/leak/).
Show full description ▾

I read The Intercept because it is one of the most well-researched, well-written and trustworthy independent news outlets out there.

It is my go-to source when my international friends ask "How are things going in Brazil?"

Since I cannot send them my reliable Brazilian articles, sending them pieces from Glenn Greenwald, for example, gets more than the job done.

It's inspiring and fearless journalism done right. Thanks to The Intercept for being simply outstanding in its values, its mission and, above of all, its execution.

The Venerable Glenn Greenwald, one of the company's founders, recently left due to widespread bias on the Intercept, including attempts at censoring reports that contradicted the far-left viewpoints of most 'journalists' working at this establishment.

Glenn Greenwald is a highly respected journalist whose integrity is on display every time he publishes an article because he is anti-corruption and isn't afraid to go after both sides of the aisle when he sees malfeasance and deceptive journalistic practices. It's part of the reason he started the organization, to provide an alternative to mainstream media when they were busy blackballing Edward Snowden who dared to blow the whistle on the US Government's mass surveillance programs.

In short, the Intercept has become just another corrupt media organization that puts agenda over facts. They are not to be trusted and if you think otherwise, you may want to consider the possibility that you are being manipulated and decide whether or not you are ok with that. 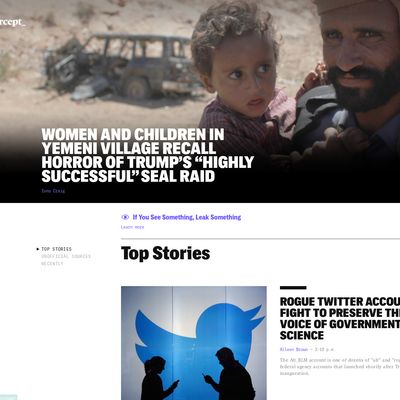 Our users have written 2 comments and reviews about The Intercept, and it has gotten 8 likes

View all
The Intercept was added to AlternativeTo by JohnFastman on Mar 11, 2017 and this page was last updated Mar 11, 2017.

Recent user activities on The Intercept