Your life is complicated, but managing it doesnt need to be. The Hit List is a task manager that is simple to use, yet powerful enough for the most demanding workaholics. Whether you just want to jot down a grocery list or you need a full-blown Getting Things Done tool for tracking every last detail of your business and pleasure, The Hit List is the perfect task manager for you.
Show full description ▾

Fully agree with @processfive… I love this app but it’s lack of support/updates is completely inexcusable. I use it because it’s the still the best in it’s field for my needs. And yes… I paid for it and am starting to regret it.

@sceptiQ: By “They” did you mean the developer has move over to help on the Hub List app? It looks very promising and the developer hopes to have the beta release out to users. He’s also very forthcoming with progress updates and open to user feedback. Very excited to try it. ?

THL is a fantastic-looking GTD app, but support is lacking. The app is still basically in beta at this point, and lately the developer only updates the app to extend the beta license. There haven't been any bug fixes or feature updates in a long time. Syncing to other apps/services is awkward at best -- you shouldn't have to use iCal as an intermediary. To top it all off, the long-promised iPhone companion app is still nowhere to be seen. The official THL forum is basically nothing but users complaining about the lack of a mobile companion app and the lack of proper syncing, and discussing alternative GTD apps to move to since the developer rarely bothers to address users' concerns.

Save your money until THL is officially out of beta, or you will regret it later.

I love this app but I’ve been having iCal syncing issues. If I make a change in THL but made a mistake, I can easily hit undo to revert from that mistake, however, all my synced tasks disappear from iCal. Annoying. 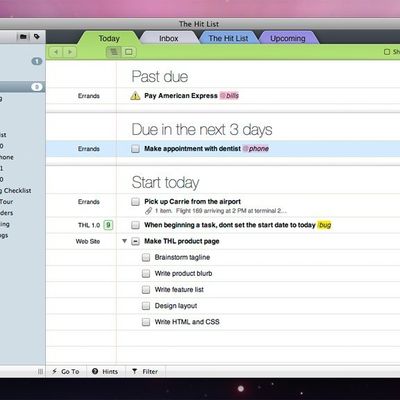 Our users have written 3 comments and reviews about The Hit List, and it has gotten 44 likes