Another very light-weight and fast text editor but with interesting options, such as compile/execute code, as well as choosing to display a whole range of ansi character codes, and option to display in binary form. But just tried, and sadly the editor doesn't appear to support utf-8 (unicode) files!

The editor looks and feels as though it was originally created for Win95/98-era, and although there's various options, such as displaying line-ending characters, or cross-wires, that are dotted around the menu, as well as default font selection, character code selection, and file association, the Options panel itself only shows 2/3 things, such as configurable tab size and tabs as spaces.

Strangely, it comes with and installs its own (fairly rubbish) font called Textplorer, not sure why. And choosing a different font such as Courier New at size 10, it becomes tiny, unlike other editors. While setting the same font to size 12, and it feels like what should be size 10.

The setup is only 700 kb, while the executable itself is 900 kb - very tiny compared to other light-weight editors.

I downloaded this to try opening large files, but sadly disappointed...

Opening a large 100 meg file takes about the same time as notepad, but consumes twice the amount of memory! While opening a 1gb file takes considerable time, pretty much same as notepad, yet again, consumes much more memory (around 2gb). While opening the same 1gb file with a scintilla-based editor, such as Programmer's Notepad, and it's much quicker, while consuming 1.4gb of memory.

So basically, textplorer completely fails at opening large files and should not be labelled as such.

Other than that, it's a limited editor, and notepad++ or Programmer's Notepad, or even notepad3 would likely better suite your needs. 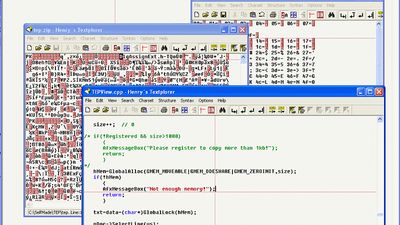 Our users have written 1 comments and reviews about Textplorer, and it has gotten 2 likes

View all
Textplorer was added to AlternativeTo by Wolfbeast on and this page was last updated .