SymPy is a Python library for symbolic computation. The stated goals of the library are to become a full-featured computer algebra system and to keep a simple code base to promote extensibility and comprehensibility. SymPy is written entirely in Python and does not depend on any additional libraries. It is available both as a desktop application and on the web as SymPy Live.SymPy includes features ranging from basic symbolic arithmetic to calculus, algebra, discrete mathematics and quantum physics. It is capable of formatting the result of the computations as LaTeX code.SymPy is free software and is licensed under New BSD license. The lead developers are Ondrej Certík and Aaron Meurer.FeaturesThe SymPy library is split into a core with many optional modules.Currently, the core of SymPy has around 13,000 lines of code (including comments and docstrings) and its capabilities include :Core capabilities Basic arithmetic: *, /, +, -, ** Simplification Expansion Functions: trigonometric, hyperbolic, exponential, roots, logarithms, absolute value, spherical harmonics, factorials and gamma functions, zeta functions, polynomials, hypergeometric, special functions,... Substitution Arbitrary precision integers, rationals and floats Noncommutative symbols Pattern matching 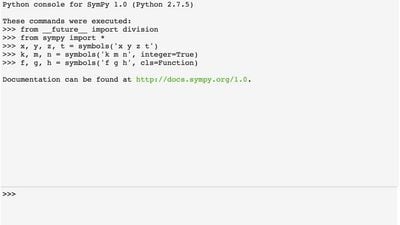 Our users have written 0 comments and reviews about SymPy, and it has gotten 29 likes

SymPy was added to AlternativeTo by NightHeron on and this page was last updated .