StreamTransport enables you to browse and download video clips from Hulu, YouTube, Joost and many other sites that use HTTP, RTMP, RTMPT, RTMPE or RTMPTE protocols to stream their videos. You can browse the sites from the built-in browser and StreamTransport will automatically capture the URL of any video you play. Select the URL of the video stream you want to download and click a button to save it to your computer. You can download up to 5 streams at the same time and pause/resume downloads as needed.
Show full description ▾

The official website now redirects to some sort of admin panel login. Last version, 1.0.2.2071, released in July 2014, can be still downloaded from VideoHelp.com

The installer may contain adware. Be careful during the installation: Forum

I will keep this post updated with links to live, working download links to the latest versions of StreamTransport. These installers have been verified by comparing them to the original files, so they're what you would've gotten from the original site while it was still online.

Let me know if the link goes down, and I'll find a new source.

At this point I'm pretty sure that the makers of StreamTransport were bullied into removing their software by Big Media, old conglomerates which still live in the early 20th century and are entirely clueless. Adobe is the usual suspect. The idea that RTMPE dumping violates laws is entirely ridiculous. You're given access to the stream, you're caching it locally, you're allowed to keep a private copy for yourself. No amount of threats or extortion will change that. Besides, you can't "pull back" something that was at one point released for free distribution.

This was very good software. It was able to DL videos that IDM and EagleGet, AllMyTube can't.. I guess I have to install Win7 on VMware to run this ?

Can anyone recommend similar software that can download rtmp and rtmpe streams ?

As I was getting more and more problems running StreamTransport, too, I started to try out alternatives, and the one I sticked with for now is TubeDigger. I've used it for several months now and am still very happy with it, haven't found an RTMPE stream it didn't catch. It's not free though – you can dump 50% of a stream to check that it works on the sites important to you, but you'll have to pay for full-length downloads.

As I mention in my review on TubeDigger, I'm sure you could do everything it does for free with RTMPDump, given enough time for fiddling, but personally, the comfort of a StreamTransport-like interface was definitely worth the price for me. If a commercial software is not completely out of the question for you, I can really recommend it. The developer is also very responsive; once, I had a problem with a new version breaking compatibility with a certain site. They sent me a fixed version a few days after I reported the issue.

This was very good software. It was able to DL videos that IDM and EagleGet, AllMyTube can't..

Can anyone recommend similar software that can download rtmp and rtmpe streams ?

I recommend TubeDigger. It's the one I switched to after StreamTransport started to fail on more and more of the streams I tried to dump.

It's not free, but there is a trial that lets you check if the program will work on the sites you're trying to download from. It will stop after 50% of the runtime in the unregistered version.

The website is not really available for anyone right now, presents a login prompt, with no hint of what's going on.

They also deleted the official Facebook page, no trace of it left. I don't have any information either, but I suspect that they have been strong-armed into shutting down by the content industry. You know: "Disappear your software, or we'll sue you for millions." Not that they would've had a case, but enough money will always get the little guy to back down. A popular charge is "conspiracy", which basically means that there hasn't been an actual crime...

They used to communicate pretty openly and also respond quickly to support questions. I'm pretty sure they wouldn't have actively removed any trace of the software for anything other than legal reasons.

Reply written about 7 years ago

It was the only program able to download Flash (.flv) video from sites which don't save their videos temporarily to the standard Windows temp directory (of IE) when viewing. In such special cases only StreamTransport can help.

this is arguably the best alternative to getflv, you get all the features for free, no hidden restrictions, and great tool for keeping videos, and download them from a variety of websites. i personally use them for my youtube account, here an example of the quality. 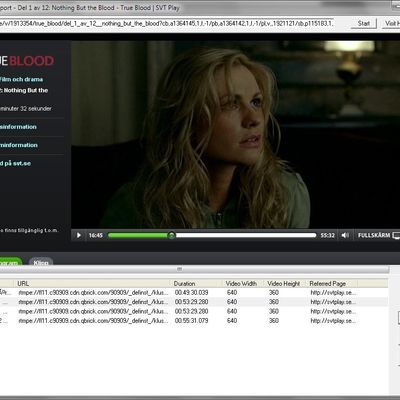 Our users have written 5 comments and reviews about StreamTransport, and it has gotten 27 likes

View all
StreamTransport was added to AlternativeTo by Goofjuzo on Jul 18, 2010 and this page was last updated Jan 28, 2022.