What is SRWare Iron?

SRWare Iron, or simply Iron, is a fork of the free and open-source web browser

Fast and effective on a chrome engine. I rate 5/5

I gave this project a second try and it still looks too shady/unclear for me. First and foremost, are its sources really can be found only on Rapidshare and their "Download permission denied by uploader" or I am missing something here? What kind of opensource is that?

Second, it rarely gets updated, but when it does, new versions can ship with odd bugs, a bugs that do not actually exist in Chrome. One of such was not working tooltips (a pieces of text that appear when you hover over a tab, a button, or an image (on a webpage) with filled 'title' attribute).

Third, when I tried to report that bug at the official forum, my post would never get approved.

I don't really like Chrome either, but I'd say avoid Iron anyway. Switch to Firefox -- which is (I guess) a real open source and, with version 27, just as fast as Chromium, -- or to whatever other browser.

There is nothing better or substantially different from chromium builds.

SRware site is loaded with 3rd party ads not blocked by "their" mind numbingly simplistic host block list that is invoked with the update checks.

Tests and results by order (best to worst)

Tests and results by order(best to worst) 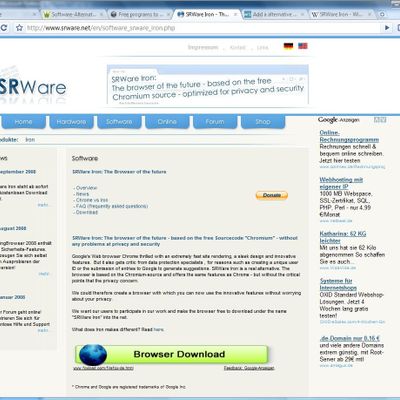 Our users have written 14 comments and reviews about SRWare Iron, and it has gotten 177 likes

View all
SRWare Iron was added to AlternativeTo by Joz on Apr 17, 2009 and this page was last updated May 11, 2021. SRWare Iron is sometimes referred to as Iron.