Spacemacs is an beautiful Emacs distribution designed for both

- Access documentation in Emacs with SPC h SPC.
- Beautiful, distraction free UI and its functional mode-line.
- All key bindings are accessible by pressing the space bar or alt-m.
- Commands have mnemonic prefixes like SPC b for all the buffer commands or SPC p for the project commands.
- Discover hundreds of ready-to-use packages nicely organised in configuration layers following a set of conventions.
Show full description ▾

The most full-featured and innovative Emacs distribution.

Spacemacs abstracts related Emacs packages/configurations through its set of layers (and there's a lot of layers, a lot). Example: you want to write Java code, then you just add "Java" to your ".spacemacs", restart Emacs, and you're mostly done (I say mostly because sometimes you'd want specific stuff like LSP and you'd need to set one or two variables and/or install the respective package for your distribution, although Spacemacs also offer the option to install it for you). If you want something that isn't already provided by the existing layers, you can 1. easily install specific Emacs packages and tweak them to your liking; or 2. create your own layer.

But it has it cons too:

Combines the best of emacs and vim

Said about Spacemacs as an alternative

inventor500 It is by far more extendable than Visual Studio Code, and combines the best of EMACS and VIM. The only downside is that it loads only a little faster than VS Code, instead of much faster like EMACS.
Positive comment • almost 2 years ago • as an alternative to 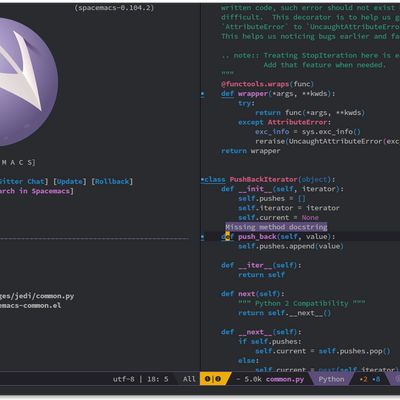 Our users have written 2 comments and reviews about Spacemacs, and it has gotten 23 likes