SickGear has proven the most reliable stable TV descendant of the great SickBeard to fully automate TV enjoyment with innovation.

Typically used with usenet and/or other download clients e.g. NZBGet, SABNZBd, qBittorrent, Transmission, Deluge, rTorrent, Syno and others, SickGear can also interact with Kodi, Emby, and Plex to automate library updates and manage watched episodes. Popular services like Slack, Discord, Gitter, Email, and hardware devices can be notified of events.

Migrating to a hassle free and feature rich set up is super simple.

SickGear does not contain or share feature code from other forks, their "similarities" compare like unbranded Cola to Coca-Cola or Pepsi while SickGear maintains perfect uptime with the longest record of being stable, reliable and trusted to work.

Some of the sick innovative gear you get;

Its advanced 'Add show' finder sorts results A-Z, aired, or by relevancy.
Has quick links to display your most recent added shows.
It has built-in source providers for max. efficiency with hit graphs and failure stats.
Keep all, or a number of most recent releases; e.g. keep the last 40 releases.
Its automated search always works to save you time manually picking from lists.

There are better alternatives to this (ie Medusa is pretty new, Sonar has been around a while). SickGear does not have much control over file size downloading, little download error control, poor series numbering support (series ###), issues with network transfers, unexpected nuking of files, build updates suddenly not working, poor renaming functions (breaks with special character names), poor developer attitude (arrogant and assuming). No forums or adequate wiki/documentation for general assistance or issue resolution, just IRC chat which requires further hurdle registration.

So many false allegations in that review, each is addressed as follows...

It's good to answer misinformed allegations, 13 points seem pretty excessive for a normal user review, perhaps it is an assault to push new readers here to move on, medusa/sickrage people have brand squatted and worse so this wouldn't surprise me - even the last point about IRC is an oddly specific inaccuracy.

Aside from this, many people comment how they love the SickGear project compared to others. They appreciate the rock solid stability and highly rate the delivery reliability when looking at what the project serves to fulfill, fully hands-off automation with no downtime, no developer introduced bugs, and far fewer issues being raised than what plague other projects in this space. 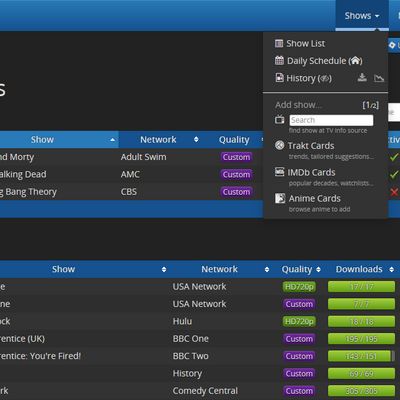 Our users have written 2 comments and reviews about SickGear, and it has gotten 3 likes

View all
SickGear was added to AlternativeTo by sdrawkcab on Feb 21, 2018 and this page was last updated Jan 6, 2021.