I have tested some of the tools that are listed on this site as alternatives to ScriptCase before making the investment in ScriptCase. I must say that while some of the products perform ok and give reasonable results, none, and I repeat, none of those alternatives even come close to the power of ScriptCase. For the record I'm not affiliated in any way shape or form with the developer. I'm simply a customer.

ScriptCase is mind boggling. When you start drilling down into the level of detail, the level of control that you're able to excerpt with this generator you realize that this is a mature, well thought, well developed, and definitely properly priced product.

On the pricing issue, sure, it isn't exactly cheap. But considering everything that can be done with this program, the price suddenly is more than reasonable.

This isn't a website development program. It is a web-based application development. As such it has extremely powerful features and a level of fine tuning on its interface and the possible interaction between objects, modules, etc. that is nothing short of amazing.

I have only scratched the surface of the generator, as I have used it mostly for simple projects. However, if you take the time to really learn the inner works, to understand and be able to harness the power within its extremely extensive set of features, you will end up having amazing applications, which function efficiently and which look, feel, and are, completely professional.

So if you just want a quick simple database, look at the alternatives. If you're looking for the market's best generator, look no further. I should do a review, but sadly I lack the time necessary to do a review that will do this project justice. Get the trial, check it out. You will thank me later.

Like others, I was swayed by the look of the product and I played with the trial version and it appeared to work fine.
But on buying the product I hit major problems going into production.
Installation on a shared server is a real problem to get some aspects working you need "root" access which most shared providers don't allow.
PDF generation does not work without making changes at the root level.
So I am stuck with a half working product...................Back to PHP runner for me
Technical support is not good because of the language issues. Also slow.

I was a happy user of codecharge studio for 15 years. So sad this multiplatform RAD program died. What was the problem? Marketing? I guess...Sales determines your budget for support and that is what i noticed between 2002 and 2017...support became slower and slower...communications about really great developments stayed behind. And i think because of this, this wonderful masterpiece between all development tools died slowly. It must have been a drama for the developpers. Setting up such a great initiative and then finding out, its just too big for human hands.

In its time, it was the best ever...you can still download, and i i can give an advice..do so.. Today for the first time, i couldnt reach the server anymore...It really makes me sad... my buddy for 15 years, starting when webprojects were still a new phenomenon and a website basically was a presentation of an organization and not much more. With CCS i build my first online d.i.y. insurance site and a complete interactive planning site for interim managers where customers and interims could do their business online, 15 years ago quiet unique, but so well doable with ccs.

The last version is from 2016. For PHP programmers, it officially supports PHP7. But also older versions and mysql is supported. The goal was clearly to create a multiplatform development tool... using the same source for PHP, asp, java etc.

Personally i tested scriptcase, PHP Runner and PHP generator. First conclusion: the extremely powerful databasedictionary died with codecharge. there is just no replacement with such strong database tools included. The most 'familiar'tool is for me PHP runner. The first encounter let me think its a very simple tool, with very limited possibilities. The more i worked with it, the more i was surprised by the power of it. Now at 50% of my learning curve, i can tell you l this great stuff. better even then CCS. The help file is very complete and easy accessible. There is much material also on the forum. The support is extremely fast and complete. Not only that, they clearly think with you and answer also questions you didnt ask yet. As an example when i asked about the security module compared to wordpress, i got a lot of information about integrating PHP runner in wordpress...which actually where my next questions. I think that this proactive support was for me the safe and sound feeling to decide to buy it. The investment is the highest of the three i compared and as a good dutch person, i tend to buy the cheapest. So the arguments in favour of PHP runner were very convincing. Support, clear documentation, very active fora, proactive development, and coming from CCS the most easy learning curve. The idea is similar its all even more elaborated. Its not multi platform but it is multi database, with multi database connections. Scriptcase has that too, but with the others i havent found that. While if you want to integrate your fast database application in most web builders, like wordpress or Drupal or most webshops, you need at least two database connections. So that demand left me with PHPrunner or scriptcase.

Scriptcase is nice, lot of information. Very charming women, how could it be different as a brasilian make. The presentation and the voices in the video almost make you buy. And lets be honest, if they can overcome the relatively small weaknessess, they would have been my winner. The major weakness for me was the chaos , that is almost a part of being brasilian in the eye of a west european....what did they say... heaven is where Italians coock, germans organize, british are the army and brasilians make love....hell is where the british coock, brasilians organise, italians are the army and germans make love.... The help files and video's mix up version 8 and 9 which is confusing at times. The help systemn, is very product oriented and not application oriented It was difficult for me to search and find information. I tried the trial and first impression was that the period to try is too short...when i thought of that...i realised that the trial period is not too short, but the whole thing is too complicated...not necessarily the tool itself, but the manual and help system. PHP runner took me a few hours to make my first app, in scriptcase, i never managed to make a complete app, almost being there, the trial was over... Besides, where PHP runner is very well documented where it comes to programming (event oriented) scriptcase is less clear. So much info but not very clear. Beautiful, slick, nice, friendly, charming, but... not practical enough yet. The moment they will realize that going international also means adapting to the way of thinking and learning of the markets they want to penetrate, their drive will make them the absolute winner and new world standard. But they need to realise that the europeans and usa professionals have different paradigmas in learning and adapting. Different from the soo charming and nice way of brasilians. Ok i use a lot of words to prevent being impolite. I never would want to offend the wonderfull people from Brasil...but here the brasilian lifestyle is really a handicap.

About PHP generator, i cam be short...the demo page is convincing, it all looks very slick. The trial version, doesnt work well...hickups, bugs all over. I stopped the test because of that. How serious should we take a company that has a bad working trial. I would like to be informed if there is a better version, because what i saw in the demo pages...I WANT IT!!!!

For now, i dont have to tell my choice...clearly PHPRunner, the most easy one to adjust to coming from CCS. Compared to CSS, where its different, its better!. Its the most expensive one, but that additional investment will pay off. 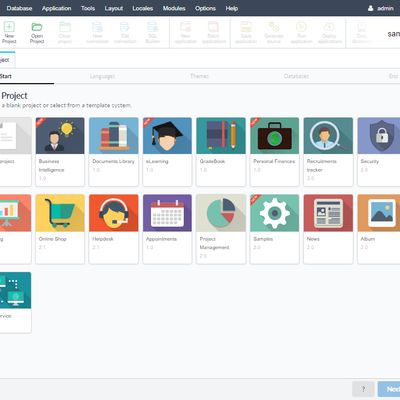 Our users have written 3 comments and reviews about Scriptcase, and it has gotten 18 likes