Rhino can create, edit, analyze, document, render, animate, and translate NURBS* curves, surfaces, and solids, point clouds, and polygon meshes. There are no limits on complexity, degree, or size beyond those of your hardware.

- Uninhibited free-form 3-D modeling tools like those found only in products costing 20 to 50 times more. Model any shape you can imagine.
- Accuracy needed to design, prototype, engineer, analyze, and manufacture anything from an airplane to jewelry.
- Compatibility with all your other design, drafting, CAM, engineering, analysis, rendering, animation, and illustration software.
- Read and repair meshes and extremely challenging IGES files.
- Accessible. So easy to learn and use that you can focus on design and visualization without being distracted by the software.
- Fast, even on an ordinary laptop computer. No special hardware is needed.
- Development platform for hundreds of speciality modeling products. (Windows only)
- Affordable. Ordinary hardware. Short learning curve. Affordable purchase price. No maintenance fees.
Show full description ▾

It may not be immediately obvious when comparing all these 3D CAD software programs, but there are two different tribes of 3D CAD software. Rhino is in the surface modeler tribe, along with SolidWorks and others. It generates mathematical surfaces (nurbs) to describe the surface geometry. Once this is described, the program can model 'solids'.
Blender and SketchUp are in the mesh modeler tribe, that represent surfaces with flat tiles all joined together. If you inspect, say a cylinder made in SketchUp, it is made of facets, not a single smooth surface.
Surface modelers are the only real option for industrial design CAD. Mesh modelers are great for freeform modeling including animation and art that can fudge the accuracy during rendering. For conventional architecture, either will do, but for advanced architectural design a surface modeler has advantages. For advanced architecture, Rhino has the Grasshopper extension, for parametric design.
3D printing accepts either tribe, via, say, STL. Rhino can also model meshes if required, so it can absorb SketchUp and Blender models.
It should be noted that Rhino is not a true parametric modeler like SolidWorks. It's main versatility is its ability to precisely handle all kinds of curved surfaces. It's core market is industrial design, but has a big following in architecture and, especially with a plug-in like Orca or in conjunction with Maxsurf, also naval architecture.
A lot of people seem to be convinced they need AutoCAD or SolidWorks, which are far, far more expensive, and yet many such people do not seem to do much more than they would in Rhino. Note that setting up a truly parametric model in SolidWorks is no trivial task. On the other hand, a home user or 'maker' ought to be quite happy with something like SketchUp (good for designing your own home or furniture), Blender (great for figurines and monsters) or Fusion 360 (a basic surface? modeler).

Has three months of evaluate period. And works with no save after.

Said about Rhinoceros as an alternative

Rhino have more wide area of usage and many additional paid solutions.
Positive comment • almost 3 years ago • as an alternative to

3Design CAD
Carbonator Rhino is probably the only CAD solution which for the price offers and delivers quality in creation. However this is only a CAD and it needs a multitude of plug-in to bring it to the level of ArtCAM. This is not an alternative but a more complex piece of software which will disappoint most of the new/young designers.
Positive comment • 4 months ago • as an alternative to 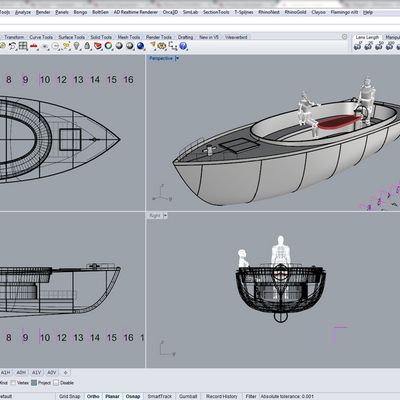 Our users have written 2 comments and reviews about Rhinoceros, and it has gotten 30 likes

View all
Rhinoceros was added to AlternativeTo by Journeyman on May 15, 2009 and this page was last updated Jun 25, 2020. Rhinoceros is sometimes referred to as Rhino.