Puddletag is an audio tag editor (primarily created for) GNU/Linux similar to Mp3tag. Unlike most taggers, it uses a spreadsheet-like layout so that all the tags you want to edit by hand are visible and easily editable.

The usual tag editor features are supported like extracting tag information from filenames, renaming files based on their tags by using patterns (that you define, not crappy, uneditable ones).

Then there're Functions, which can do things like replace text, trim, change the case of tags, etc. Actions can automate repetitive tasks. You can import your QuodLibet library, lookup tags using MusicBrainz, FreeDB or Amazon and more.
Show full description ▾

Much better than EasyTAG! Great for people who want actual control over what goes into the tag fields. Just like in Mp3tag.

The problem is: it is written in python2... soon it will rot, as support for python2 is closed.

This is most clean tagger I've came across in Linux

This is a simple and powerful tool to suit up your downloaded mp3-junk. 3 clicks - and your library looks like a drugstore.

Unfortunately it stores the Actions differently than mp3tag, which makes it kindof not really an alternative if you don't want to spend hours typing in your actions again. The function $strrchr is not supported in puddletag. You also have to take care not to encapsulate your functions with quotes, because in that case they will be printed instead of executed. Square brackets are also not supported. As puddletag is designed to be similar to mp3tag they should try to make a mp3tag-actions import working.

Still, it is nice that there is the possibility to make your own Actions. I'll keep using it.

Actions are located in .local/share/puddletag/actions

I wanted to batch-split genre tags on ";" and this thing did just the trick, and pretty quickly at that. Looks like it can do a whole lot more. Recommended.

This is the best Tagger for me on linux and I agree its like Mp3Tagger for linux and its the closest ive found. Its great just what i needed. 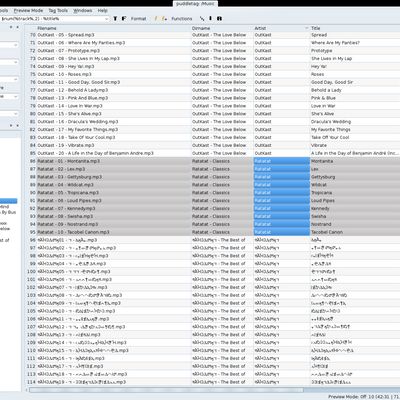 Our users have written 9 comments and reviews about Puddletag, and it has gotten 29 likes