Mp3tag is a powerful and easy-to-use tool to edit metadata of audio files.

Mp3tag is developed for Windows: macOS and Linux systems can also run the application under a compatibility layer, such as

I collect all sorts of music. Some of it is brand-new and comes with reasonably comprehensive metadata already baked into the files. Some of it is old enough that it was recorded before vinyl formats were standardised, let alone tagging formats. I have single tracks, whole albums, multi-disc collections, soundtracks that were never published as soundtracks, and uncountable odds and ends. When perfectionism demands that my collection be sortable and accurate, there's only one way to approach the hairy problem of achieving consistent, well-formatted metadata across a large library of files of every imaginable media container format: Make everything perfect with Mp3tag.

It sometimes feels like everything is possible with this program. I've been able to:

Cleaning up and maintaining a music collection is time-consuming, but what could be a grueling, Sisyphean slog can instead be reduced to right-clicking a folder in Explorer, selecting "Open in Mp3tag", and running one or two menu commands to handle the worst of it. If that's not worth the price— Oh, right, it's free! Given how much time it'll save, though, you'll most likely want to toss a donation at the author anyhow.

Downsides? It lacks some modern niceties that amount to edge-polishing. The interface that looks and feels a little dated (though I'll take dated-but-functional over shiny-but-hamstrung anyday). Given the frequent updates, I wish the installer just had a single-button "same as last time" option. I wish the quick tag-editing sidebar were a little more configurable. I could list a million more little things here, but they're more like feature requests than complaints. Overall, it's just plain good stuff.

Short form: If you're a Windows user and you've ever grumbled about what a mess your music's metadata is, don't put up with it; fix it with Mp3tag.

I use it for many years but I travel a lot so most of the time I use it offline. Maybe you dont have such a problem online but... sometimes I try to change the file name and it says something like "the name of the file is too long" or so, though I try to make it shorter and less complicated. Do you know what I'm talking about? Do you have any clue what's this about? Any Tips?

PS. It does't happen very often but when it does, it's always (or almost always) stuff from torrents. Recently I download mostly fresh stuff from chomikuj.pl and I cannot recall any situation like I this with the files from their servers...

Thanks for making such a lovely free useful software

It's okay if you have the exact numbers of tracks which 80% of my personal experience is not the case. It won't let you remove your random tracks from the list you have, which makes the program useless most of the time. The sources are excellent and fast though

Reminds me of Bulk Rename Utility in presentation, there's plenty of tagging options and the UI is very legible, if dated looking.

I despise how it always auto-loads files on launch, ostensibly assuming you keep all your music in the same place. Only way to disable it is to select an empty folder.

A really helpfull tool which i liked to love over the years for keeping my music library metadata clean. Quite old design a looking a bit complex in the beginning. Once I asked the developer, if he would free the code so we could make it compatiple with linux. But he decliened. A star deduction because the code is not open source. Thanks for the whole development.

A very useful and easy to use application

Very simple, lightweight and powerful software. Congratulations to the developer and creator. It's very easy to work with. In a word, it is a powerful and very useful tool with Highly functional and with regular support and updates .Thankful

Open/Free soft must have •  My Windows software •  Audio Player, Editor, Converter, Tool •  Software for my Windows 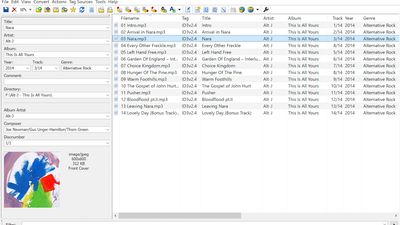 Our users have written 15 comments and reviews about Mp3tag, and it has gotten 582 likes