What is Process Hacker?

Process Hacker is a feature-packed tool for manipulating processes and services on your computer. A free and open source process viewer with powerful process termination and memory searching/editing capabilities.

• A simple, customizable tree view with highlighting showing you the processes running on your computer. • Detailed system statistics with graphs. • Advanced features not found in other programs, such as detaching from debuggers, viewing GDI handles, viewing heaps, injecting and unloading DLLs, and more. • Powerful process termination that bypasses security software and rootkits. • View, edit and control services, including those not shown by the Services console. • View and close network connections. • Starts up almost instantly, unlike other programs. 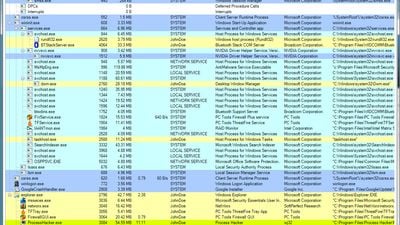 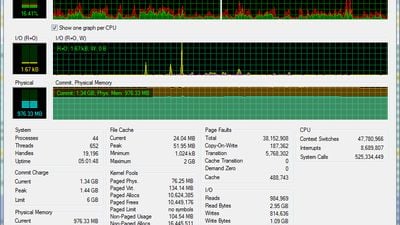 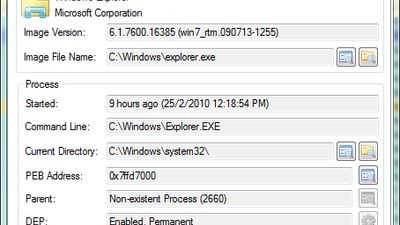 Our users have written 13 comments and reviews about Process Hacker, and it has gotten 299 likes

Process Hacker was added to AlternativeTo by l3x0r on and this page was last updated .

It's the best task manager I've seen so far, first it's true that I don't use all features, but the one that help me a lot is the "threads" tab, when looking at a process/service properties.

Really useful because you can see what DLL do what, how much resources it eat (like the one that contain windows update search "wuaueng.dll" that eat a lot of CPU sometimes, I just suspend it some minutes when starting update, and resume it to have an ultra fast update ^3^).

After this, there's a lot of info, the little tray icons that show a popup displaying CPU, GPU, RAM, Network, Disk, I/O,… they can be all displayed at the same time too, with little graphs !

There's a lot more, like the multi-tests to close a process, saving priority of each process (but only work if process hacker is running), displaying a lot of data in columns, displaying graphs… there's really a lot !

But the biggest issue… like process explorer if your computer run high, like playing a game or using a game engine, photoshop, or any software that need some RES, it'll crash… (well a lot of times it crash when I open the explorer.exe or do some lowly tasks and my CPU is low…).

Hope to see a really stable version, or an alternative that's as good as this one !

Better than Process Explorer because it's open source and shows the total memory used by Chrome.

It just disappeared from Github. And the repo is now pointing to the old project, and under other team. What happened?

Beautiful application, both to look at, and to use. It's one of my mainstays.

I've been using Process Hacker as long as it's been available. There's so much that can be said about it that a review could nearly become a book-length enterprise, but I'll refrain.

Process Hacker is vastly superior to Process Explorer, because it simply provides much more information about processes, services, and network, disk, and firewall activity, etc.

The new dark mode in Process Hacker took me some time to get used to, but now I love it.

I've been running Process Hacker nightly versions for years, and have never had a stability issue. Process Hacker updates can be invoked and applied manually using the UI, and the process is so fast and easy that it's always staggering to see, when you compare it to the drudgery you usually have to go through to update an application. It's literally just a few clicks.

Process Hacker is constantly targeted for false detection by so-called antivirus applications, including Microsoft Defender. If you run Process Hacker and use Microsoft Defender, I'd strongly recommend excluding it from detection, or you'll eventually be aggravated to find that it's been deleted. You can do this in the Defender UI, but I did it in Group Policy by excluding the following directories:

Just to note, I used the actual directory names -- not environment variables -- when I added the exclusions on my system.

I moved from SystemExplorer. It does exactly what I used SystemExplorer previously for: making default program priorities. Bonus that Process Hacker is open source.

Exactly the alternative I wanted to Windows' Task Manager. It's much better in basically every way with way more options and ability to analyze, and runs much much faster. Get the Nightly version though - the 2.X version doesn't report GPU correctly and the nightly (3.X) has far more features to play with.

To be clear this is still very much in development and receives frequent updates - just not the stable version. The nightly version is always improving

Cool program, gives you all the information you want to know about your processes.