What is PRISM Break?

Opt out of PRISM, the NSA’s global data surveillance program. Stop the American government from spying on you by encrypting your communications and ending your reliance on proprietary services.
Show full description ▾

I went through this list a few weeks ago and have been using several of these alternatives since.

@natterjack565 you're quite right, I've discovered there are plenty of other listings than just apps, as you've described.

I was under the impression from an admin that the site was only for apps (software), after my adding of a similar informational resource was denied a listing, some time back. Maybe that's changed, and to the better, ay? Restricting to apps-only maintains standards I suppose. But also misses out links to a lot of apps that people have not had time to list here on alternativeto.net - so an all-in-all improvement!

One note of caution about PRISM Break: don't take every service it recommends as 100% safe.

For example, under secure email services, it includes a recommendation for the RiseUp network in the United States.

Number one, it's in the United States. More worryingly, there is a debate around the meaning of a failed canary warrant, with anonymous admins disputing any significance. Additionally, a person who can be linked with the anonymous admins was the subject of criticism in the German Khaos computer club for having a vague, untraceable background, despite being involved at senior levels of Linux projects.

Finally, funding for RiseUp includes dollars from US government sources, raising concerns about the real identity and independence of those behind RiseUp, and how much sensitive information might be vulnerable.

Had rated PRISM at 5 starts, but downrated to 3 stars after finding RiseUp included.

Protips: Check your sources, follow the money, trust no one, iron your tinfoil once a month so it doesn't get too crinkly, etc.

Alternativeto.net lists itself as a software guide, so listing prism-break as an application is a little bit misleading.

But there are links to some great apps on the site, with suitable cautions.

AlternativeTo is not just about software --- there are plenty of examples of websites, protocols, etc.

Thanks @Natterjack565 .. that does appear to be the case.

I was going off responses from the site owners, who rejected website links and something else I cannot remember that was a non-app. But seems you're right and I was wrong! 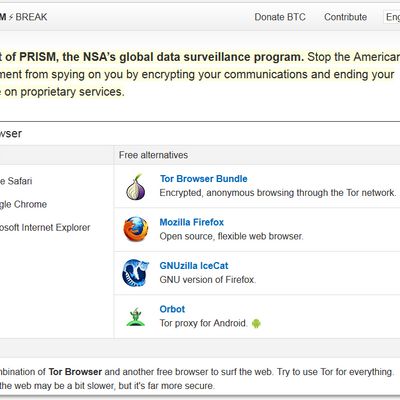 Our users have written 5 comments and reviews about PRISM Break, and it has gotten 126 likes