AlternativeTo let you find new Windows, Mac, Linux, online and mobile software based on applications you already know instead of useless categories. AlternativeTo is a new approach to finding good software. Tell us what application you want to replace and we give you suggestions on great alternatives! Instead of listing thousands of more or less crappy applications in a category, we make each application into a category. Think of it like forever evolving blog posts about good alternatives to the software that you're not satisfied with. And the "blog posts" are generated by you through suggestions, comments and votes. 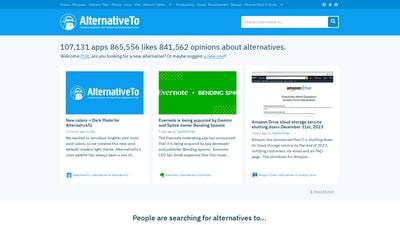 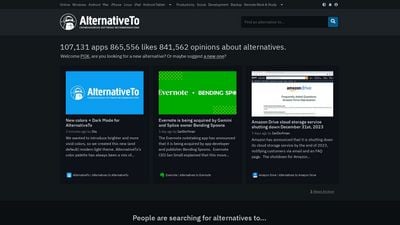 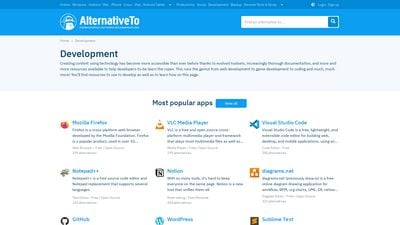 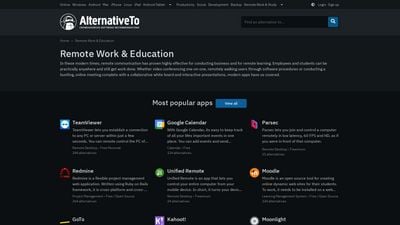 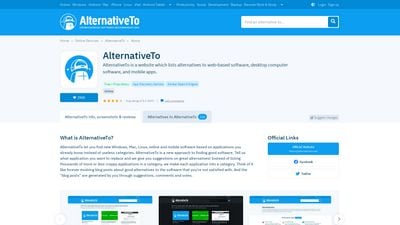 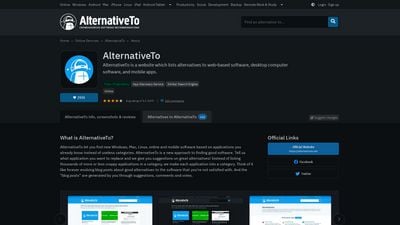 Our users have written 123 comments and reviews about AlternativeTo, and it has gotten 2941 likes

AlternativeTo , for your help in finding new solutions!

Great place to be, btw

Does not allow country listings. So if the software restricted to one country, it isn't listed.

Geo restrictions is a mess and we do not like them more than you do. However we have to do the best of the situation and the best would of course be to have a global team with language experts and a localized site for most major countries and markets but that is expensive and not realistic for us as the moment. We do want to make improvements for this however and we will add a "market" attribute to apps sometime in the near future hopefully, we will probably only allow English though but it will be an improvement :)

But for now we have to draw the line somewhere and at the moment we have drawn that line to allow "Major US services" and of course allow stuff that are available in the US + more countries. And since we are humans we sometimes even do exceptions for that, for example (as we are from Sweden) we knew that when Spotify arrived it was going to be a major service with a large coverage of markets around the world so we would probably allow "the new spotify" here as well even if it only worked in the UK for example.

Another aspect of being human is that we also sometimes make mistakes and apps that shouldn't be allowed are slipping thru and we are open to discuss them with you :)

I'm not talking about other languages. This site is literally ALL USA and it's really, really unfortunate. AlternativeTo is completely useless to 36.29 million people in Canada and 65.64 million in United Kingdom and 24.13 million people in Australia.

Sorry that you feel that way but we are really focusing on global apps and software and the "services" part is actually just a little side thing. We want to expand on that and we want to make that better but it's takes a lot of time and development effort to make it happen. Its also much harder for our admins and mod to approve stuff that may only work in certain countries and so on.

And remember this site is founded in Sweden and we have people that helps us from all over the world, so we are not some US based service that doesn't understand that the rest of the world exists.

Again, sorry if you feel that way but we are doing the best we can.

Best you can? An employee removed my forum post raising the issue. Deleting the forum post is ignoring the issue, and doesn't let your users share ideas on how the site could be improved. As you know ,your users are how ad revenue is generated.

What forum post was this? We have asked around and nobody seems to know but we remove loads of stuff each day and some regular users also has moderator rights in the forum so it may have been some mistake from somebody, sorry for that but please continue the discussion here if you have more questions and / or suggestions. We are open to everything :)

The forum post was regarding geolocation. Can't you search by author and see what post I made? :)

Alternativeto has confirmed they "do not" allow apps restricted to a certain region, and the forum thread I made was deleted. I feel like something is covered up. Maybe I will make a new thread and send you a link (my word against alternativeto's)

My alternativeto review doesnt even show up publicly.

Ola, here is the discussion. https://alternativeto.net/discussions/about-alternativeto/55740/georestricted-apps-not-allowed-/

** I have archived it since the alternativeTo team seems to have somehow permanently lost it.. http://archive.is/5cnQI **

The best! And now with a beautiful dark mode! GOOD JOB!

I love these great findings! Thanks for sharing!

I like it, but the delay for an approval can be long.

Without this site, I would find it a lot harder to find software options. It has helped me find software that is more obscure and not readily discoverable on search engines like Google or DuckDuckGo.