PrimeWire provides an index of movies from video hosting sites and lets you watch them online. Search the archives or browse the categorized, filterable listing of videos and select one to get more info along with links to watch online. You can also create an account to get access to more features like voting and commenting.

The website was previously known as 1channel, then as LetMeWatchThis and PrimeWire. The previous domain PrimeWire.ag was set down, but it now redirects to Primewire.li
Show full description ▾

Flagged as potentially breaking copyright or other laws

Many links for movies/shows, you can turn off ads, its just a well rounded site

Aggressive ads, even with adblocker and DNS filtering.

I find it very easy to get around and find exactly what your looking for...thanks for working hard on fixing the problem...Great entertaining site..thanks...

the first movie i clicked on "Cold Pursuit" pulled up 3 viruses. Microsoft was all over it immediately. I think I'll have to pass for the time being. I'm sorry. I've been a loyal customer since 2010 or 2009. (not 100% sure the year) since the beginning I believe. Ive introduced many customers. hope it all works out.

Primewire was a fairly well organized site but not so user friendly. It was a site often plagued with a LOT of aggressive, spiteful people, a group which, unfortunately, included many of the moderators. General consensus was that arrogant, power hungry bullies ran the site and ya best keep quiet.

The developer sat offshore sucking up the money from ads and ignored the everyday abuse of the people who made his money possible.
Rumor had it that logged in users' devices were used to move cryptocurrency transactions around the globe, unbeknownst to users and at their expense.

Some mods often made bullying, irrational decisions muting and banning them for no provable reason.
Apparently they finally pissed off enough people that their abuse resulted in the site being trashed.

That is not to say all the mods were abusers by any means. For example Johnny_Rotten was one of the best, a "user friendly" mod who would go out of his way to help you in every way he could...a very nice person. But he was in the minority, sadly.

The PW forum was a warning place more than a resource or an exchange of ideas. Nothing in there was ever updated or organized for clarity in it or archived; many of the topics and threads were YEARS old and useless. Essentially it was useless to the users. Question something there and be ignored or directed to the site 'rules' list that was nine years old which basically told you to shut up.

Certain users were allowed to insult and demean anyone with no restraint. Some were allowed more than one account with a wink and a nod. Other users were instantly banned for the same thing. Some of the uploaders were terrified if they opened their mouths about some of the mods taking advantage of their position in the uplinking money game, afraid they would incur the wrath of a Supermod and lose their source of income if they spoke up.

Many of the users were not on PW long enough to discover all this. Many of us were. I'm rather lad it's over, to be blunt.

Too bad you cannot choose the language...

We're finally back at https://www.primewire.il
We're still migrating our database but everything works again! 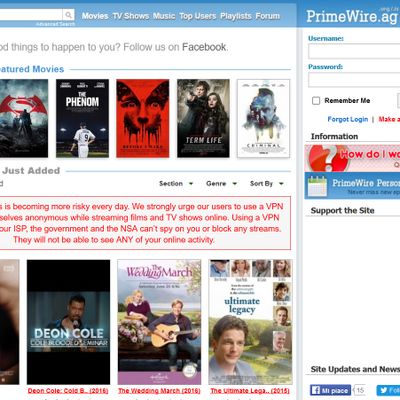 Our users have written 9 comments and reviews about PrimeWire.li, and it has gotten 42 likes

View all
PrimeWire.li was added to AlternativeTo by Doomicle on Jan 12, 2013 and this page was last updated Mar 17, 2020. PrimeWire.li is sometimes referred to as 1channel.ch, 1channel, LetMeWatchThis, PrimeWire, PrimeWire.ag.