gedit , is a text editor part of

Pluma is a text editor that comes with the MATE desktop on various Linux distributions.
It's very simple but functional. It's hard not to give it a positive review since it aims only at one thing and it does that very well.

A NOTE ABOUT THE "FREE" LICENCE:

The Alternativeto.net page for Pluma says it is "free". This is ambiguous because "Free" can mean two different things:

Pluma is both. Most people unfamiliar with software development and licencing will assume Pluma is free in the sense of free beer. But in actual fact Pluma is distributed under GNU General Public Licence, which means you neither have to play for Pluma nor worry that someone is making money at your expense from it nor that the code is restricted. It's not, you can download it, look at it and modify it at will. Great stuff. 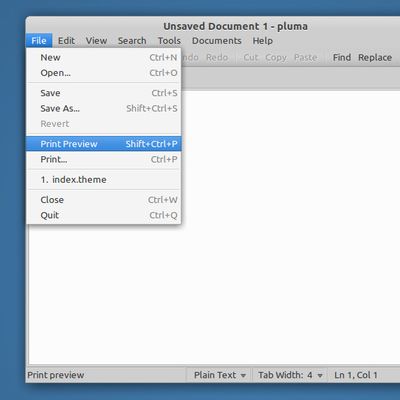 Our users have written 1 comments and reviews about Pluma, and it has gotten 12 likes