Pinboard is a bookmarking website intended for people who want to reliably keep track of large numbers of links. Its goals are to be useful, fight bloat, keep things fast, and stay small. Social bookmarking for introverts. m.pinboard.in 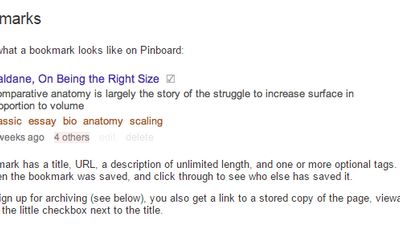 Our users have written 11 comments and reviews about Pinboard, and it has gotten 149 likes

Pinboard was added to AlternativeTo by josephholsten on and this page was last updated .

After using Delicious for years, I needed an alternative to avoid the distracting ads and unfortunate new user interface. Though there are free alternatives, I chose Pinboard. What a joy! It has a clean interface, an excellent Firefox Add-on, and many accessible features.

Pinboard uses Tags well. After you click one of your Tags to filter which bookmarks you see, you can click the (+) to the right of any other Tag to further filter your results. That's important when you have 1,00s of bookmarks, let alone 1,000s as I do.

Pinboard imported my Delicious bookmarks and even cleaned them up, separated compound Delicious Tags (multi-word) into single Tags.

Sure, there are free alternatives, but for a few dollars a year you get a great service. There is no free trial, but you can pay and then get a refund within 3 days of purchase.

Currently I have about 1200 pins on pinboard and used it for about 3? years.

Its a very useful application.

It scales much better than any of the other bookmarking software application I have tried (xmarks, pocket, diigo, tagpacker, google chrome bookmarks)

I highly recommend getting the keyboard pinboard extension. I bound mine to CTRL+D https://chrome.google.com/webstore/detail/pinboard-keyboard-shortcu/cgponlekaepfdikdebmnklhfnjlbieng

Pros of why pinboard is good

Pinboard is the closest thing out there to a Delicious replacement. It basically is Delicious, which is why Pinboard acquired Delicious' carcass in June 2017. Unlike Delicious, you pay for Pinboard. This would be fine, good even, if development wasn't dead and customer support existed, like, at all. But stagnant development and nonexistent support are what you get for $11-$25/yr.

More than anything, you're paying for the dev to be a Twitter activist on the official Pinboard Twitter account. I happen to agree with his politics 95% of the time, but, man, I'm not paying him to rant into the void, especially on a company account. (Perhaps what gripes me most is I don't see evidence that this form of protest changes much of anything, but I digress...) He says he's "retired" from the tweeting game, but I'm skeptical. Addictions to social media don't go away that easily for most people.

I've been with Pinboard for nearly three years now, and these are my problems with it:

There's NO support. I've tried contacting Pinboard twice—once in July 2018 through Twitter and once via email (6 days ago)—and have received NO RESPONSE. The Google Group for support appears to be a dead end, too.

Development is DEAD or nearly so. Users have been waiting years for the ability to do basic things, like edit tag names or merge tags (my biggest want/complaint). The dev neither puts in the work nor responds to users.

He stopped updating the Pinboard blog in July 2017. In the last post, he bragged about how great his service is.

In it, he revealed he's raking in at least a hundred grand a year from what's a mediocre effort (29,000 users at $11 a head ain't bad at all, even after factoring in business costs) and that he's traveling about for a political organization he's founded. I'm fine with him making money, and I feel his organization is a much better (and no doubt more successful) outlet for his political efforts than Twitter. What annoys me is his blog post also reveals his travels mean he ignores the site and "a backlog of very, very, very irate messages." Those are his words.

There are no official phone apps. This has never been a deal-breaker for me, but I do find it ludicrous in 2018. The site, despite being text-based, isn't even responsive on mobile. Smartphones have been around for well over 10 years.

Pinboard is fugly. It looks about like del.icio.us did back in 2005. It gets the job done, I guess, but it could be so much more.

The dev could do the apparently unthinkable and hire a designer to give the site a bit of color and improve usability. While I would never want it to become the overwhelming visual buffet that linksharing services like Pocket are, it could really use a facelift. It's not getting one, as far as I can tell.

Final Thoughts: My subscription to Pinboard expires next month, and I don't plan to renew. It's always been almost exactly what I want, but watching Delicious, and now Pinboard, die a slow, awkward death due to mismanagement gets old. Sadly, no other service quite compares (yet). But I'm done paying for what's little more than a glorified database of my own links. I may return if things change, but I'm not hopeful in the least.

Right now, I'm trying out BookmarkOS, which is a different concept, but could be good if it adds some more sharing/public features and options.

It's really absurd that no one seems able to manifest a basic linksharing service/utility without eventually running it into the ground.

Thanks for your detailed review. I just signed up a week or so ago and am having a few problems, and struggling to get any support as you describe. I think maybe I'll just give up and look elsewhere.

If you find a good alternative, please reply again! The only real alternative I'm seeing is Shaarli, which is self-hosted, so no good social network features. BookmarkOS has unfortunately been unresponsive to support/feedback already, so they're not going to be a solution. I asked for a refund 24 hours ago and haven't heard back yet. Crazy that people think you can run businesses this way.

I'm using Raindrop.io at the moment, it's nice-looking and there are mobile apps and one for Mac too. It's free unless you want some Pro features ($3/month) which I'm not convinced yet I will need. I had a query and got a response from the developer within a couple of days which is a definite improvement on Pinboard!

I'll give it a try! BookmarkOS ultimately got back to me, but I'm not sticking with the service for now. Not enough social/sharing features. Raindrop.io looks promising. Thanks!

This is the review. I'm in a similar boat except that I'm even grandfathered in to a "for life" account that I paid for early on when that was the model. I love most of how the service works, but the complete stagnation in development and lack of basic features for cleaning house down the road (like tag merging) are just killers. If it was an open source system I'd invest my own time fixing these things, but the closed development model and completely non-existent development cycle have sent me looking for alternatives.

I'm reluctant to post my personal data, any data, including sites I visit in a cloud or server.

Pinboard looked promising 5 years ago, when I paid for an archival account. Now that my subscription is ending, I can not get Pinboard to send me my archive. Emails went unanswered, my post to the pinboard google support group was not approved, dm on twitter was unanswered. A public comment on twitter got me a reply that he'd "look into it", then nothing.

Maciej is infamous these days for his complete lack of customer support -- I've had multiple unanswered emails over the past 5 years. The official Pinboard twitter account is a mess of political rants. Save your money -- and your bookmarks -- and look elsewhere. My current recommendation is raindrop.io

Pinboard was very promising when I paid for it, but I'd warn off any newcomers. It hasn't been developed in years and what were excusable rough edges in a new service being actively developed have turned into inexcusable blockers for a long running service. Don't pay for abandon-ware. The concept is good but at this point it's lacking basic functions that make your bookmark collection hard to maintain (and I dare say the service unsustainable). It wouldn't be hard to turn it around if the developer started developing again, but he is off speaking and fundraising for various activism—not developing.

Pinboard has helpful support, they have a small support team but problems are done within the expected limit. (72 hours) Pinboard offers a minimal feature set with medium to low pricing. I can see why others might like it but unfortunately not for me. (hence the 3 star)