Noteflight is an amazing online notation editor. On the free version you get 10+ instruments to choose from, lots of musical symbols and more. On the payed version (Cresendo) you get lots more instruments, guitar tab and sharing options. Best way to wite music on the web.
Show full description ▾

I used Cakewalk in the 1990s. That was an awesome piece of software for editing musical scores. Noteflight is a huge disappointment. Just move a note over an existing piece of music and watch every overlapping note disappear. Really, Noteflight?...

Observe that the screenshots posted here have NO overlapping notes WHATSOEVER.

Hey @rstarkov, I realize this is old but I wanted to mention in case it helps, overlapping notes are possible using multiple voices like noted here:

As a songwriter, I like Noteflight for some things, especially as a mobile way to scribble down a melody or thought no matter where I am. I've used the service for over a year now, and also reviewed it recently for my performing arts column among a host of other music notation and songwriting tools.

The other reviewer is right about Noteflight in that you cannot overlap notes -- which, yes, is a pain and completely stupid from a musical standpoint. However, it's not like it's hard to get around this either. Just layer what you're doing with more than one track -- I do this all the time with piano, percussion, etc.

The service is great for collaboration, creative tinkering and musical scribbles. You can login, work with a song, then your collaborator can do so and save the wholly new work or simply make notes/comments. Production-wise, the sounds under Noteflight's paid 'Crescendo' service even include some genuinely good sounds and instruments, and I've output some decent demos just using Noteflight. As long as you're prepared to layer what you create for a richer sound (I usually use two or three different guitars, two pianos, etc.), you'll be surprised at what you can do.

However -- and now here's the REAL problem -- I have yet, in over a year, to ever get a single response to a request for help. Not once as a journalist for doing a story on them (!) and honestly, even more troubling, never once as a paying user who occasionally needed help with a playback or distortion issue on a few pieces. (Compare this by the way to Avid (Sibelius) and MakeMusic (Finale), among others, who responded professionally ASAP every step of the way.)

The site lists an e-mail contact and at one point had a form too (I can't remember if it still does). When I had an urgent issue, I used the form first. No response. Tried e-mail. No response. Tried following up with both. No response. Tried researching it and even e-mailed the Noteflight founders, whose e-mail addresses are listed publicly -- just to pass along my media questions, and then later on -- to ask them to simply get ANYONE to respond to me over a tech glitch.

The troubling thing is that the service promises that your data is SAFE, your compositions are always saved and backed up (you can save up to 1000 with Crescendo -- I have a few hundred songs or song pieces saved in my own area). But what good is this when you know that if (I mean, WHEN) something happens, nobody is going to be there to help you?

In over a year, I have never ever received a single response to a request at Noteflight. So if you use Noteflight, just do so knowing that you should constantly export EVERYTHING you do to XML so you can use it elsewhere, and work with the knowledge that you may never actually get any help you need if something does go wrong. 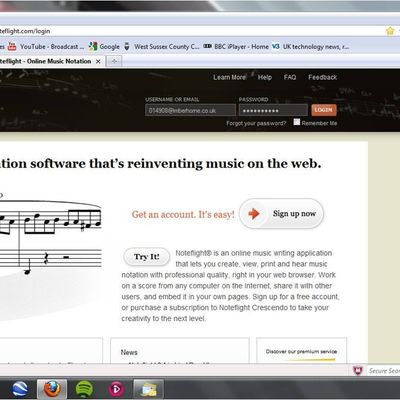 Our users have written 2 comments and reviews about Noteflight, and it has gotten 6 likes