OpenMPT (short hand for Open ModPlug Tracker) is a popular tracker software for Windows. OpenMPT is completely free and allows you to create and play back some great music on your computer. Based on the original ModPlug Tracker written by Olivier Lapicque, OpenMPT is free software and supports a wide variety of module formats and offers an intuitive, native GUI as well as advanced features such as VST plugins and ASIO output.
Show full description ▾

OpenMPT is the most versatile and advanced tool among free trackers, yet it has very friendly and convenient GUI, despite having huge amount of options. It has very good support for VST instruments, which makes it amazing, open source alternative to regular pianoroll based DAWs. Its playback engine, libopenmpt, is one of the best available out there, supporting all major module formats like IT, XM, S3M, MOD, and its own native OMPT, and is available as standalone library/precompiled plugins for media players. OpenMPT is capable of directly rendering compositions to Wave/MP3 streams, and has full MIDI controllers support. For now it's Windows only, but it was unofficially mentioned that Linux version is about to be released somewhere in 2016

Nice but interface little bit complicate but if get use to not hard. maybe be alternative famitacker is basic.

I cannot for the life of me figure out why I can hear my samples when I record them in my pattern, but I hear nothing when my sample is played back.

So, I finally got it to work... for all of a couple seconds. It stopped working as soon as I unplugged my headphones. Then I plugged them back in and restarted it. Now I can't get it to work again. This software is really fragile and seemingly inconsistent. 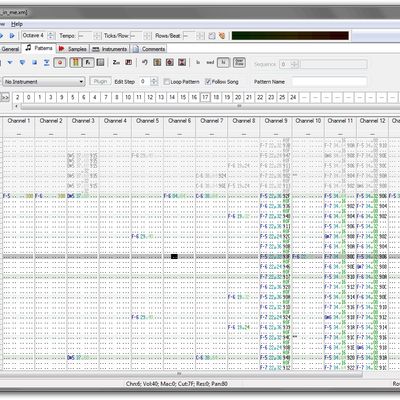 Our users have written 3 comments and reviews about OpenMPT, and it has gotten 42 likes

View all
OpenMPT was added to AlternativeTo by nitrofurano on Dec 6, 2010 and this page was last updated May 20, 2021. OpenMPT is sometimes referred to as Open ModPlug Tracker.