MC Musiceditor is free/open source (GPLv2) music notation software (Windows). It has been developed with only one purpose: to make life of musicians easier when making scores. This results in a userfriendly editor which makes professional scores without requiring specific knowledge (other than musical basics)! In short: MC Musiceditor is the easiest way to write, refine, hear and print professional scores.

With MC Musiceditor 6.1.0 and later you can convert MCM and ABC code to a Javascript webstring which can be parsed by Abcjs. Abcjs is an open source parsing and rendering tool for ABC written entirely in Javascript, so it allows sheet music to be rendered with the browser. 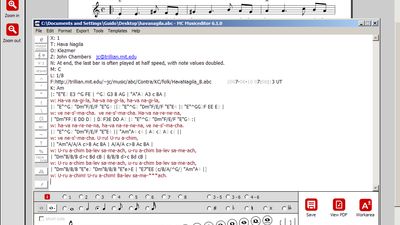 Our users have written 0 comments and reviews about MC Musiceditor, and it has gotten 4 likes

View all
MC Musiceditor was added to AlternativeTo by Vikash on and this page was last updated .