Maptitude GIS & mapping software gives you the tools, maps, & data you need to analyze & understand how geography affects you & your organization. Maptitude is the most capable, & least expensive, full-featured mapping software available. Designed for data visualization & geographic analysis, Maptitude comes with a comprehensive library of maps & data for your country.

Maptitude is a powerful combination of mapping software & geographic data that provides everything that you need to make informed decisions & get the maximum return on your sales & marketing budget.

Maptitude gives you a suite of tools that you can use to create districts for your business mapping needs.

Your client, territory, & business information are your greatest asset, with over 80% of company data having a mappable component. Maptitude allows you to fully realize this potential

Includes a FREE Country Package
Unlike other mapping & GIS software packages that require users to purchase data separately, Maptitude includes extensive geographic & demographic data so you can get started as soon as you install the software.

As a GIS programmer and consultant I have used Maptitude for 22 years for hundreds of projects having switched from ESRI and a few other GIS products.. Maptitude has become a super-stable, powerful, easy to use, highly productive GIS. The speed at which it can manipulate data and display and label maps is amazing. It makes beautiful, colorful, well-labeled maps and if you really want to customize and automate your app you can use the built in GISDK language which has wonderful development and debugging tools. Their support is great also!

I have used Maptitude exclusively in my 20+ years in health/hospital planning. It has been indispensable in my work. Mapping data oftentimes tells the story in a way other modes can’t do. I was very excited at the prospect of being able to make custom maps efficiently with all the 'virtual' cartographic tools a health planner would need. Maptitude exceeded my expectations over the years in both the product and the quality of support offered. The upgrades have been excellent in making this tool even more powerful yet relatively easy to use while maintaining an affordable price. If you know nothing about GIS, and even if you do, the Maptitude training is worth the money and effort.

I have taught courses in the use of GIS in public health for 15 years. The software includes Mapinfo, ArcGIS, the old Arcview, and Maptitude by Caliper Corporation in Massachusetts, USA. I have taught semester long courses at the University of Washington, many one day to 2 week long intensive courses to university students, public health practitioners of all types from program administrators to PhD epidemiologists/ bio-statisticians. When I have taught ArcGIS it tends to become shelf-ware. When busy public health practitioners go back to their workplaces there is neither the time or the local expertise to help them progress to using the software on their own. This is not the case with Maptitude. In a week long course by Wednesday students are beginning to get enough confidence with ArcGIS to actually think about the content of the exercises I use. But by Friday there are still often very shaky. With Maptitude this transition happens by Monday afternoon. By Friday, they are practically GIS experts. As far as ease of use and the availability of excellent documentation, Maptitude is the leader. With regard to functionality for public health work, I'd say the same. Software developers seem to forget that the intended users are not interested in falling in love with their software - they have real work to be done with deadlines and limited resources. In public health there is usually no one in your organization to make the maps for you much less do for you any spatial analysis or modelling. Caliper Cooperation seems to have not forgotten that software is only as good as its capacity to be used. Sometimes it seems that using ArcGIS requires one to be a cryptographer to figure out what to do next or where such and such a tool really is. Maptitude on the other hand has an intuitive user interface with supporting documentation easily readable by non-specialists but complete enough for specialists. Further, most data other GIS packages can use, Maptitude can use as well. Oh - and it is less than 1/2 the price of the competition and with a lot of data to get started.
[Edited by RHoskins, August 14]

Caliper®’s Maptitude® product was brought to my attention in September 2014, when I was looking for an alternative for MapPoint. Since then I have used the program in my work as a logistics consultant on many projects both in Europe and in the USA and would recommend it to anyone who is in need of a professional, yet not complicated desktop GIS system. The display options allow to incorporate Bing, Open Street or Google maps; extra map layers for a wide range of countries can be imported via a built in download free layers add-in. A Translate Menus: (Dutch) Add-In creates a short-cut on your desktop to run Maptitude® with the menu items translated to Dutch.

[Short version] : Maptitude™ excels in the GIS software landscape due to its ease of use, intuitive GUI (familiar Windows interface first developed by Xerox™ and Apple™ in the 1980s), universal cut-copy-paste features (within and outside software, OS complying) and due diligence to database management protocol. It follows strict adherence to topology avoid the geometric pitfalls of shapefile based GIS. Spatial analysis tools are capable of handling very large datasets that are only limited by memory and processor speeds. Unlimited geocoding, complex spatial queries using without programming language knowledge and high quality cartography makes Maptitude™ a few standard deviations above the industry average and the GIS software to beat.

One of the fundamental advantages of using Maptitude over other GIS software is the extensive use of ‘Selection Sets’ or what we know in database lingo as ‘view’ (wikipedia defines ‘views’ (SQL) as “ a stored query on the data”. Views or ‘Named queries’ are at the heart of Maptitude™ and hence makes map making and geometric/topological manipulations easy and intuitive.

But first, why Maptitude™? Suppose, each pharmacy in a city is asked to report the 10 nearest hospitals or 1000 middle income ($50-80K household income) customers. The number of steps to achieve this in Maptitude™ is surprisingly small. The ‘Edit-Fill’ function (two key strokes) in the data(view) window (very similar to Microsoft Excel’s ‘Fill’ function) allows you to perform an incredibly vast array of geographic analyses like the above pharmacy example. Competing GIS software either requires programming or large number of steps to achieve similar outcomes. Since all types of geoprocessing can be conceived through programming, the role of GIS software should be to ease any programming burden and allow intuitive geoprocessing to flourish. Maptitude™ excels in this context.

Sometimes I challenge my students to find the shortest number of steps to solve a problem using any GIS of their choice. Maptitude™ wins hands down. For example: I asked students to find a circular band around each town (14 in total) that covers 300 miles of roads for each town (of the 15K miles of roads covering 10 counties assigned). Maptitude™ required no programming and used 5-10 clicks to get a map showing colored circular bands around each of the 14 towns and taking less than 20 minutes of total time on a moderately fast desktop PC. The same assignment done using ArcGIS™ required programming a script using Python™ and required an approximate solution for one town before the system crashed.

Maptitude™ has an intuitive interface with a map view ‘window’ and a dataview ‘window’ (both of these are ‘views’/’‘named queries’ saved in the GIS project). One of the advantages of this database approach is file handling. The original database is not edited (unless one wants to permanently change mistakes, updates etc) but ‘queried’ as in any typical database system. This approach is called ‘non-destructive editing’ like the ones seen in Picasa™ photo editing software or Adobe Lightroom™ software. It optimizes disk space and avoids the bookkeeping nightmare faced in many GIS related projects due to file duplication, file mis-tracking etc. This is also the future of mapping since multiple users and analysts work on the same map database and reuse map data multiple times. In addition, this allows for easy collaboration as we see software moving towards cloud based computing. It does not mean the desktop nature of Maptitude™ is redundant. In fact, Maptitude™ is still heavily desktop based (a few instances of Maptitude™ in cloud based systems like Amazon Web Services is showing up). A fastfood chain recently chose Maptitude™ for the privacy and security provided in desktop systems in addition to other advantages Maptitude has over competing software.

The second reason for Maptitude as a primary choice is their data handling. Big DATA is the buzzword now in science and business and Maptitude™ allows gigabytes size files to work effortlessly. With unlimited geocoding, almost unlimited rows and columns (1 billion by 1 million or more) the analytic capabilities far exceeds spreadsheet limits and most desktop computing. The seamless interface with Oracle™ and other database systems allows Maptitude to be the workhorse GIS.

Finally, for $695 with census data at local, regional and country level (from tracts to counties and zipcodes) and the sheer volume of easy to use functionality makes me -- a 20 year veteran of GIS a happy consumer.

I’ve used Maptitude™ and TransCAD™ (form the same parent company Caliper™ Corporation) the GIS of my choice for the very reason that I can complete research in academia and industry (including startups in Silicon Valley) with the minimum of effort and hours. This provides me with enormous economies of scale when enterprise type projects require my expertise.

I am a student at the University of Dallas reviewing the sales team's customer service. I inquired about a student licence of Maptitude around 3pm and had a reply in 5 minutes, it's of course the standard message but that was exceedingly prompt. Then the next surprise was that the company responded with, 'we would be happy to donate Maptitude for Academic Use'. I was originally trying to get an ArcGIS student licence, but it was so complicated to use in the free trial (my only relevant experience with this is a class on analyzing spatial data in R). Also, $100 for the ArcGIS licence, while perhaps fair, was not exactly easy to come up with. My only cost here is the $3 my university will charge to send the documentation. I really appreciate the work done developing Maptitude, I have only worked with the trial for a couple hours but I found it very intuitive and was easily able to load one of my sample data sets straight from Excel begin working with the map.

I have had nothing but great experiences in my dealings with Caliper's customer service. When I have a question or request it has never been longer than one business day to get a a reply and generally much less than that. 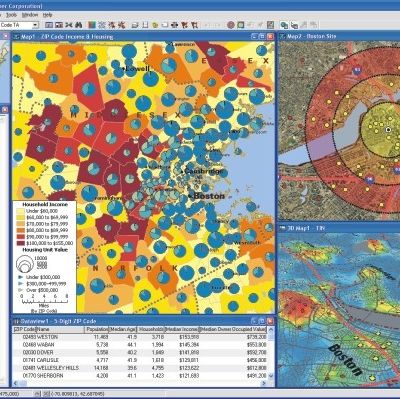 Our users have written 14 comments and reviews about Maptitude, and it has gotten 22 likes

View all
Maptitude was added to AlternativeTo by ryanbeymer on Jul 6, 2011 and this page was last updated Aug 30, 2017.