What is Lucas Chess?

The aim is to play chess against the computer with increasing levels of difficulty and with a limited number of hints that are given by a chess tutor. Also included are thousands of training positions such as different types of endgames, tactical combinations and chess problems (mate in 2,3,4 and more). The computer uses different chess programs (so-called chess engines) of various strength. The user starts playing against the weakest engine at first. Initially the engine plays with limited strength but as the user wins more games the engine will be given more calculation time and its strength will improve. Eventually the engine will reach its maximum level of strength and if the user continues to win he will be passed to the next stronger engine and so forth. And even if you consider yourself being close to winning the next chess world championship, I can promise you that the included chess engines won't run out of steam that quickly. The strongest engines included in this program (such as Rybka and Stockfish) will give a professional top ten world ranking chess player a real run for his money. To overcome a level you must win against the engine twice, once with the white pieces and once with the black pieces. With every won game your personal point score increases. The higher the level the more points you receive for a won game. The engines are arranged in groups. Each group contains engines of similar strength. The basic rule for engines is, you have to collect plenty of points against lower rated engines until to can play the stronger engines. In detail this means each group of engines has a minimum required point score. If you want to play against an engine of a particular group your personal point score must have reached at least the group's minimum point score. 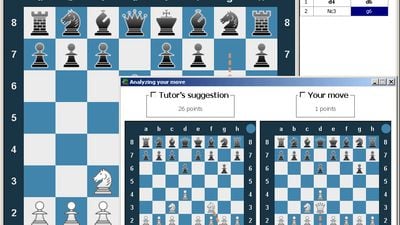 Our users have written 0 comments and reviews about Lucas Chess, and it has gotten 16 likes

Lucas Chess was added to AlternativeTo by Reprotected on and this page was last updated .

Said about Lucas Chess as an alternative