It is a free tool to delete files blocked by something you do not know. LockHunter is useful for fighting against malware, and other programs that are blocking files without a reason. Unlike other similar tools it deletes files into the recycle bin so you may restore them if deleted by mistake. Integrates into Explorer menu. At the moment LockHunter is in beta stage. So use it with care!

Key Features:
- Shows processes locking a file or folder.
- Gives you detailed information on the process.
- Allows to unlock, delete, copy or rename a locked file.
- Can delete a file at next OS restart.
- Allows to kill locking process.
- Allows to remove locking processes from hard drive.
- Can unload DLLs from processes.
- Integrates in to Explorer menu.
- It deletes files into the recycle bin, so you may restore them if deleted by mistake.
Show full description ▾

Unlocking sticky files/folders can be risky ... it should be done with caution.
sometimes reboot can resolve the issue (safely remove any USB devices that might be implicated)
Sticky USBs should be disconnected while the PC is shutdown

Example:
Installed an ancient Win-XP app on Win-7 PRO x64 pc. EXE would run, but not show GUI.
Was not listed in TaskManager. Could not delete nor unlock the old EXE.
LockHunter showed a message that old EXE would be deleted on next boot. And it did

CON:
The context menu caption is ridiculously long (verbose).
I contacted the developer (email) several years ago, his reply: "he would think about it".
A new version and he didn't think about it. :(
Caption is not in Registry and I cannot dig deep enough with "Resource Hacker"


Example:
_FileSearchEX has a default caption "Search via FileSearchEX" ... another overly verbose caption.

excellent work done.succeded to find and remove the hidden and invisible leftover of an uninstalled app which still persistently embeds itself on the computer files.highly recommended to all...

It works as expected

I have been using Unlocker for many years, until I had to migrate to Windows 10. I had to search for an alternative since it did not work anymore on Windows 10 and LockHunter worked flawlessly. It is great for what it is created for, unlocking files due to them being stuck locked for one reason or another.

Why you guys arent using the Longpath tool? It is an awesome tool to delete anything

Except for the nifty little $50 tag? Can you give us a discount? ;)

works great easy to use, software is also digitally signed as well

That is an easy to use application that works in many cases.
But not all: I had case where the LockHunter tells that the file was not locked and it was. I had to use another software to find the culprit. 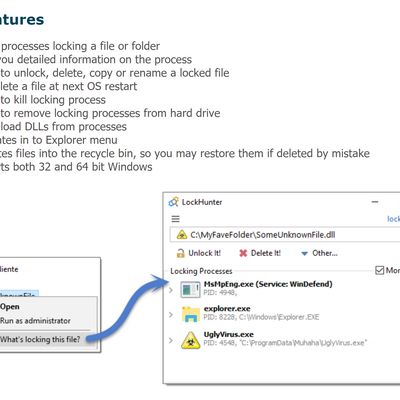 Our users have written 11 comments and reviews about LockHunter, and it has gotten 126 likes

View all
LockHunter was added to AlternativeTo by Journeyman on Jul 10, 2009 and this page was last updated Jan 27, 2020.