LaunchBox was originally built as an attractive frontend to

DOSBox, but has since expanded to support both modern PC games and emulated console platforms. LaunchBox aims to be the one-stop shop for gaming on your computer, for both modern and historical games.

Steam in order to help get you up and running as quickly as possible. Game box-art and metadata is automatically downloaded from the LaunchBox Games Database, a community-based online database that allows anyone to contribute. Wikipedia can also be used.

LaunchBox supports arranging and filtering by genre, platform, ESRB rating, developer, publisher, and much more, and even has custom status and source fields to use to classify your games however you choose. LaunchBox’s interface is incredibly easy to use and powerful all at the same time.

Not only does LaunchBox automatically download box art for your games, it also grabs beautiful fanart, screenshots, logos, and more, creating a surprisingly immersive experience. Fanart and other images can be used as LaunchBox’s background as you browse your games, which really helps to create an attractive, fun experience.
Show full description ▾

I like it and wanted to use it over Playnite (which is a great alternative to it) but I couldn't since it is memory intensive. It always used over 1 GB of ram while Playnite always used under 100 MB of ram. It also asks for a certain Retroarch core for use with PS1 roms in my experience while Playnite allows you to use any core for any system. So I think Playnite is the better choice. However, it is hard to decide because both are very functional and useful.

Launchbox is not only an awesome multiconsole frontend, but it is the best I have ever used. I am not exaggerating and to prove that I am not just tryign to support the product, I will say this; I feel the free part of it, meaning the UI of the LaunchBox, is MUCH better than then paid part of it, meaning the BigBox. I honestly do not see why anyone would prefer the BigBox mode, and the reason is simple. With the normal free UI, you can see all your games with their respective boxcover. You can zoom in and out so you can see smaller boxes to fit more on the screen or stretch them to see them as nice large boxes. If the game has a background, as you have it selected, the background will change to reflect the game too. IF you care to see if about the game, you can open on the right the information tab, that shows more pictures of the game and also information for it.

With BigBox you only see on the left a list of titles, and when you choose that title, you see its info and cover on the right. I have to admit, if I used LaunchBox for ONLY my personal game collection, then indeed BigBox would be awesome, but when used with thousands of roms I do not know, having such a list means that I have to hover over every title, to see what about it could be or what it is it's cover, or remember all the thousands of games. Admittedly, someone can say that if I do not know the game, seeing it's cover will not help much. I might be weird, but it feel it is nicer to visually at least see even a cover, rather than just a name.

Either way, compared to other new MultiConsole frontends, this one seems to stand out for me. It has really nice detection when it comes to names of games, and it can automatically download images. I have to admit I have not used many, as I skipped most after seeing their UI. One is mGalaxy, that actually has a nice UI, giving it an "arcade" feeling, but still it is more or less like BigBox mode. Just shows titles and you have to know the game. Maximus Arcade has an alike UI, but it is paid, so even if I liked it, I would still not really compare it, but it all honesty, I do not like that one. RetroArch looks really nice in a simplistic kind of way and even if it needs a bit of manual labor, it was what i used before, so I have a soft spot for it. But definitely RetroArch does not hold a candle to other frontends, because it lacks pictures. Keep in mind I have not used it for ever, so I am not sure if by now it has pictures, but at least last year that I was using it, it had not. ICE is nice for people that use Steam a lot I guess, but I avoid steam and even when I buy my games off of it, when they are not available in another form, I avoid it and try to play them in offline mode. It is nice if you have a couple of roms, but I feel ICE is not very flexible for people that have thousands of roms.

Last comes Hyperspin!!!. Hyperspin definitely is the best frontend, for anyone that wants to go for a good looking frontend that is simply kickass. The compilation of the whole thing needs quite some manual work, but for people that look around online, they can find Hyperspin prepacked with pictures, videos (the preview ones) and different awesome looking themes that change the whole UI. But no matter what, Hyperspin will never match for me Launchbox or even some others. The reason that that with Hyperspin you have to scroll through games, just so you can go to a specific one. Of course you can jump on a different letter if you press right, instead of down, but still to go from playing a game starting with A to a game starting with J, you can to switch first to the J part of the list and then scroll downwards. When I see Hyperspin, I feel it is made for a dedicated machine that will externally look like an old Arcade Box.

All in all, I feel LaunchBox is the perfect frontend for anything, be it Roms, your PC games or even old games with DosBox, since if anything this is why it was made for. I am not sure if i am in the minority of the people that feels that BigBox mode is not better than the free LaunchBox, but I am glad I do see it like that. Of course there are features that make the premium version worth paying for. You can customize it to look even more awesome, activate it to show even more information and play video previews of games. If anything, it will make it look much more sleek and awesome and I am sure for the people that want to have a sleek frontend with extra features, 50$ is worth to pay once. I say 50, because I personally would never pay 20 for 1 year, when I can pay 50 for ever, however long that for ever is.

One way or another I think I found the best frontend for my old collection of games, be it the bought ones I have, or old ones from Mame, abandonware and of consoles that do not exist anymore (sadly).

Thank your Unbroken Software for creating this, upgrading it and still giving it for free, minus some premium features. I hope everyone is having a good day and have fun!

Great software for organizing many emulators for many different Systems. Works with RetroArch to so full support for practically any system. Plus, it's free! Though the Paid version is very worth it, you can survive with the free version! 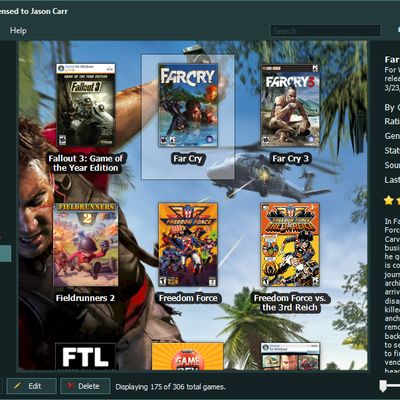 Our users have written 3 comments and reviews about LaunchBox, and it has gotten 41 likes

View all
LaunchBox was added to AlternativeTo by SevenSapiens on Jun 20, 2014 and this page was last updated Nov 10, 2020.