HSQLDB (Hyper Structured Query Language Database) is a relational database management system written in Java. It has a JDBC driver and supports a large subset of SQL-92 and SQL:2008 standards. It offers a fast, small (around 1300 kilobytes in version 2.2) database engine which offers both in-memory and disk-based tables. Embedded and server modes are available.

Additionally, it includes tools such as a minimal web server, command line and GUI management tools (can be run as applets), and a number of demonstration examples. It can run on Java runtimes from version 1.1 upwards, including free Java runtimes such as Kaffe.

HSQLDB is available under a BSD license. It is being used as a database and persistence engine in many open source software projects, such as OpenOffice.org Base and the Standalone Roller Demo, as well as in commercial products, such as Mathematica or InstallAnywhere (starting with version 8.0) 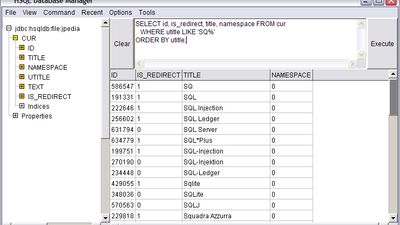 Our users have written 0 comments and reviews about HSQLDB, and it has gotten 9 likes

HSQLDB was added to AlternativeTo by mer30hamid on and this page was last updated .