Holdkey is a Windows program that makes it easy to type characters with accents.
No more hassle with alt codes or other time consuming methods to create characters like : é à ø ü € ß ñ ï ç ö e g and many many more.


Holdkey has a learning curve of about 1 minute, just type like you always do until you need a character with an accent, then hold the character for half a second, a small window with several character variations appears, then choose the one you want. Holdkey runs in the background and works with almost all programs.
Show full description ▾

The free version is good enough but Pro version is even more amazing!

Just discovered this after upgrading to a new laptop that lacks the accent keys. Trying to constantly use character map was cumbersome, and Alt Gr doesn't give enough control over which accents to use.
Had hoped, now that Microsoft owns Swiftkey, that such functionality would be built into windows, but alas Holdkeys is the only solution I can find that allows you to use your keyboard as normal, but hold a key to display accented versions of the letter (as per modern software keyboards, such as Google Keyboard, swiftkey etc).

The fact as you can use it for free is incredible.

[Edited by nascentt, December 29]
Downgrading rating as the program is extremely buggy and developer doesn't help. bought pro to try and solve constant program failures, only for them to increase with pro version (program stops working twice every 15 minutes)
can't recommend this anymore with the severe issues is has.

Said about Holdkey as an alternative

AntumDeluge Both are used for quick input of special characters.
Positive comment • about 4 years ago • as an alternative to 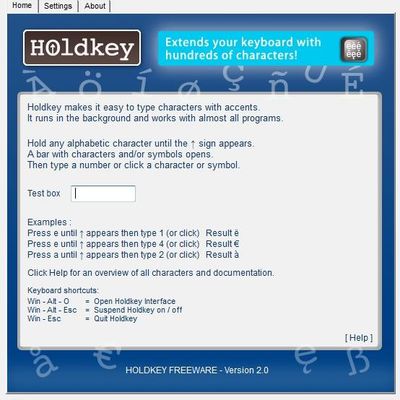 Our users have written 2 comments and reviews about Holdkey, and it has gotten 1 likes