What is Google Wave?

Google Wave was an online communication and collaboration tool that made real-time interactions more seamless -- in one place, you could communicate and collaborate using richly formatted text, photos, videos, maps, and more.

A wave is a conversation with multiple participants -- participants are people added to a wave to discuss and collaborate on its content. Participants can reply any time and anywhere within a wave, and they can edit content and add more participants as a wave develops. Its also possible to rewind waves with the playback functionality, to see what happened, and when.
Show full description ▾

Google announced in August 2010 that there were 'no plans to continue developing Wave as a standalone product'. They maintained it until April 30, 2012, when it was shut down. Development was handed over to the Apache Software Foundation which started to develop a server-based product called Wave in a Box and later Apache Wave , but it was discontinued on January 15, 2018.

never did find a use for wave while it existed but it was cool while it lasted..

So google is shutting down wave, or at least abandoning it. Ashame.

I use Wave and love it. I use it mostly for taking/sharing notes on projects or classes. There are a few scalability issues when waves grow beyond a certain size but, aside from that, it works great and is very easy to use.

I've got my account, and I'm starting to connect with people on Google Wave. There's a bit of a learning curve, and it's going to be a slow start for all of us using it. However, this is a new protocol that's going to have an impact on the way we work together and communicate online...it's very exciting to be in on this! 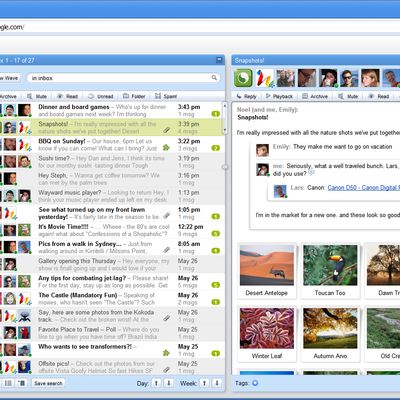 Our users have written 4 comments and reviews about Google Wave, and it has gotten 82 likes

View all
Google Wave was added to AlternativeTo by aygul on Oct 18, 2009 and this page was last updated Oct 28, 2021. Google Wave is sometimes referred to as Wave.