ExtractNow is a simple utility that allows you to extract multiple archives quickly and easily.

Why wear out your clicking finger extracting files one by one when you can extract at once? ExtractNow does a fine job of bundling compressed files and extracting their contents in one fell swoop. ExtractNow has a clean, well-designed and easy-to-use interface. To extract files, simply drag and drop them into the main program window, or right-click the files while in WindowsExplorer. ExtractNow supports the two most popular compression formats, ZIP and RAR, as well as a handful of other formats.
Show full description ▾

Fake "virus" allert is made on "heuristic" "precognition" by bad antivirus software:
If you click on provided link, it will show you message as follows:
"Probably harmless! There are strong indicators suggesting that this file is safe to use."
Detection ratio: 3 / 56

There are portable, standalone and installer versions (at main site) of program.
ExtractNow supports drag and drop, and it works flawlessly at all kind of Windows and Linux - through Wine, also does work nicely at WineBottler (Mac).

What is missing in ExtractNow right now is support for some new exotic archive formats, like NanoZip, ZPAQ or FreeArc. But those are mostly experimental or beta versions, and not in wide use.

This is the best free batch extractor I've found so far. I use it on all rars I have. Just watch out when you install it - it bundles toolbars if you don't untick the options.

This application will overwrite conflicting files regardless of the settings you choose.

This is the best batch extractor there is. That being said, it's very buggy and crashes a lot for me (always has even after major releases). Too bad because I always hesitate to recommend it. If it never crashed, and actually sorted directories alphabetically (how is this not possible?), I would love it even more.

This app was one of the major reasons i started this site all together :)

Wine: Supported through Wine on Linux and Macintosh. 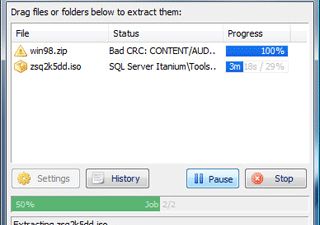 Our users have written 6 comments and reviews about ExtractNow, and it has gotten 29 likes