What is Disk Explorer Professional?

This application is a powerful tool for cataloging all CDs, DVDs, floppies, ZIP disks, or other removable media, hard drives, network drives, or even FTP servers on the Internet (they are called volumes). Entire structure of volumes can be cataloged as well as internal structure of various archive files (ZIP, 7-ZIP, RAR, ARJ, LZH, CAB, TAR/GZIP, ACE, JAR and others) including self-extracting installers (EXE).

The application can automatically include contents of various commonly used files (such as readme.txt, file_id.diz) entirely or just in part into a catalog (called a database). Files can be processed by filters that can extract file summary or even create a thumbnail of the file. The current version is equipped with 18 filters which can extract for example song/interpreter/album name from MP3, WMA, OGG, FLAC, WAV or VQF files; size, bit-depth, format and even thumbnail from images of over 40 file formats (JPG, GIF, TIF, PNG, BMP, PCX, CDR etc.); properties of various sound files; obtain title, keywords, author, statistics from office documents (such as MS Word and Excel); title from HTML documents; or just copyright holder, name and version from executables. Comments can be added to any volume or folder. All filters are fully configurable, different file types can be associated to any filter.
Show full description ▾

The program is no longer updated. Last version, 3.70, released in February 2010, can be still downloaded from the official website.

I can see with full responsibility that this software here is a brilliant chunk of electronic program code. Only it can compete with proprietary "Where Is It". It has every single important feature which we need from this kind of software. If you are not agree, I ask you to point me another completely free software with this great workability.
Only one complaint I can quietly speak here is that latest version is very old, it is from far distant 2010...

I have tried several other programs for cataloging my boxes of DVD's, CDs and HDDs, like CdCat, Virtual Volumes View and others, and while they did the main job, I felt I left something out, like something was missing. The filters of this program are all I needed, because thanks to the thumbnails and metadata the filters can collect, you feel more in control of your files and stuff, the virtual system has it's own categories (very useful if you are like my that have hundreds of external media lying around with random content), and if that wasn't enough, you can export your databases in several formats, for example, a full HTML page with all the volumes you have and if you want to share the catalog for someone who doesn't have the program and is lazy to install, you can create an auto-exe read-only file so they can check your files without the program itself. It even integrates with the program Total Commander, so you can check Disk Explorer Professional 3 files (.ded) within the same interface. So if you are a fan of Total Commander, and need a more detailed library of your external files in a small container, this is the program for you. Oh, and I loved the startup sound.

I agree, it's a fantastic tool, and I'm surprised that it took me so long to discover it, considering I probably tried every single other program of the sorts before it. Shame that it doesn't seem to be updated anymore (the last version was released almost 5 years ago), but how fantastic of the author to re-release it as Donationware.

I have tried Advanced File Organizer before, which is much more minimalistic, but for cases where that is enough, is a brilliant tool as well. I still use it regularly and am very happy with it, but it's not been updated in an even longer time (8 years!) It doesn't have as many metadata extraction filters and report features though.

None of the other tools really seemed to do what I wanted. They lacked in completeness of information they extracted, in the searching and filtering functions, reporting (HTML exports, etc.), performance, or simply stability when analyzing files. For example, one alternative that in theory would sound and look very good is Where Is It?. Unfortunately, the filters kept crashing on any set of files I tried to catalogue during my trial period (2014 version). I started disabling the problematic filters, but then it would just be other ones that crashed. So unfortunately, that is not an option either.

Disk Explorer Pro remains the top of the bunch.

Personally I have one more complaint about this great software tool. How can I create volume with double subvolume inside? I Mean I want to create one parent disc volume which will contain two subvolumes. I need it for double-sided disks. 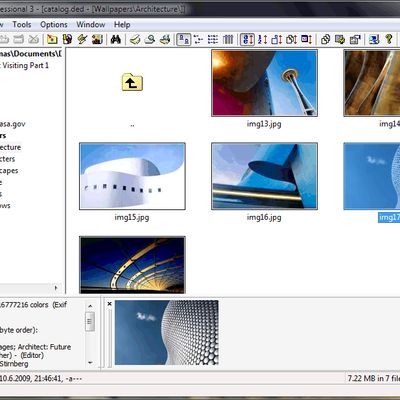 Our users have written 3 comments and reviews about Disk Explorer Professional, and it has gotten 16 likes