What is Cuckoo Sandbox?

Malwr.com is a free, non-commercial, closed-source example of a running instance of Cuckoo Sandbox while also using VirusTotal (Google subsidiary) APIs and libraries to present the file analysis.

If I understand the CS blurbs it can test new apps without actually installing those apps ? If so what a clever concept !

So far CS is LINUX and MAC focused but nothing for/about Windows ... even after 10 years have passed.

Cuckoo Sandbox could be very helpful for non-Windows users.
There are 730+ issues listed on Github ... of which I would expect for a relativly new program ... but I am not prepared to trawl through 700+ issues to find Windows leads.

I cannot rate Cuckoo Sandbox without a Windows version to test.
22-Apr-2020 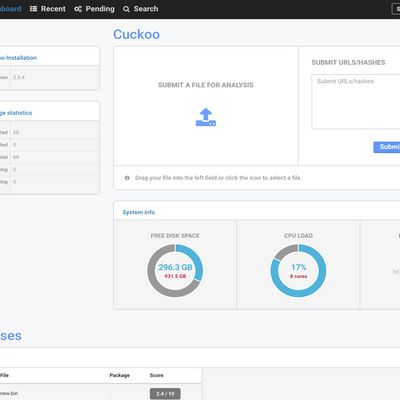 Our users have written 1 comments and reviews about Cuckoo Sandbox, and it has gotten 18 likes

View all
Cuckoo Sandbox was added to AlternativeTo by aguy on Aug 20, 2013 and this page was last updated Nov 18, 2020. Cuckoo Sandbox is sometimes referred to as Cuckoo, CuckooSandbox.