What is Core Temp?

Core Temp is a compact, no fuss, small footprint, yet powerful program to monitor processor temperature and other vital information.

What makes Core Temp unique is the way it works. It is capable of displaying a temperature of each individual core of every processor in your system!
You can see temperature fluctuations in real time with varying workloads. Core Temp is also motherboard agnostic.

All major processor manufacturers have implemented a "DTS" (Digital Thermal Sensor) in their products. The DTS provides more accurate and higher resolution temperature readings than conventional onboard thermal sensors. (How does it work?).
This feature is supported by all recent x86 processors. Processors by Intel, AMD and VIA are supported. A complete list of supported processors is available.

Core Temp is easy to use, while also enabling a high level of customization and expandability.
Core Temp provides a platform for plug-ins, which allows developers to add new features and extend its functionality.
Show full description ▾

Unlike the big, scary red warning says, Core Temp is absolute safe and 100% secure. I've used it since it first came out and have had no problems in any way. In fact, it's one of the few programs on my laptop (at least on the Windows partition) that I literally can't remember crashing even once.

Also, after reading the warning approximately an hour ago, I reinstalled Core Temp (the 64-bit version, although I used to use the 32-bit one before I got my new box) to personally check for bundleware or other suspicious stuff. I even took the time to read the entire ToS to objectively scan for demons in the fine print, but to no avail.

After this, I promptly ran a Norton AV scan and then, to reassure myself the warning on the alternativeTo page for my beloved Core Temp was bogus, ran Malwarebytes in safe mode, as well as the Malwarebytes rootkit scanner. Finally, for good measure, I searched DuckDuckGo, using strings like "Core Temp" and "malware", ran it through a date filter to see the most recent results and scanned the list voraciously.

I checked several reputable sites' search engines as well, with no luck. At this point, my OCD started kicking in, but I tried to remain calm and went over my previous actions, and what led me to this moment of terror.

That's when I realized the warning was not only not necessary, but could be considered libel. Unless, that is, the Great Arthur Liberman is actually a diabolical, sadistic Uber-Democrat that will stop at nothing to get root on every box from here to Timbuktu; in which case, the warning should stand. But to crucify a man because you're some incompetent putz who confuses high-quality software with malware is way out of line, buddy.

Consider the intellectually-stimulating wording of this infamous warning: "Installer contains all kinds of malware, difficult to uninstall." Mine eyes have never partaken of such majestic, flowery verse, in English or any other tongue. Surely, the lad or lass who wrote it must be a genius on par with Kipling or Lord Tennyson! But seriously, it's completely untrue.

Core Temp is a beautiful piece of software engineering that has served me well, and I'd recommend it to anyone I know, personally.

simple and free, works well for years, updated frequently, support intel and amd CPUs and the best part for me is it has a portable version

It consumes almost zero CPU power unlike Speccy, for example, which can also show CPU temperatures in the tray area, but consumes 5-7% CPU. It worked well with my former CPU Intel Celeron Dual E1400. Now with another one, Pentium Dual E5700, the temperatures that it shows swing back and forth between 37 and 55 within half a second. I'll have to use something else now.

It's a beautiful application: small, simple but powerful and for the fool that made the warning, secure, both the site and application. I don't even have to use uBlock Origin when I visit the site and Ghostery reports nothing. Also, I've used, updated, installed, reinstalled and configured the program a LOT, since it was first released years ago, actually. I vouch for the security of this program, its installer and Website. I know most people in this world don't know me, but I'd stake my honor on it. 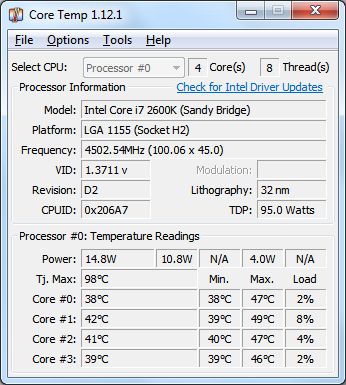 Our users have written 5 comments and reviews about Core Temp, and it has gotten 54 likes