Allavsoft can fast and batch download movies, music videos, playlist from all kinds of video sharing websites as well as convert to any popular video or audio format. 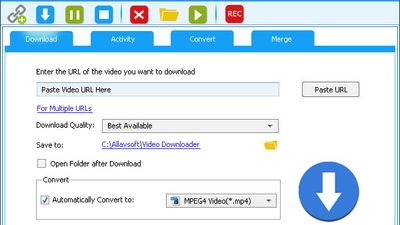 Our users have written 3 comments and reviews about Allavsoft, and it has gotten 12 likes

Allavsoft was added to AlternativeTo by Allavsoft on and this page was last updated .

Searching for the best music and video downloading software?

Want your favorite videos and music without any hustle of downloading first and then converting it from third party software?

Want to download your favorite courses from popular platforms such as Udemy, Lynda, Coursera, etc.?

If yes, you are at the right place as today we going to do an Allavsoft review, a video and music downloader made for the ease of users who wants to download resources from popular platforms such as Spotify, YouTube, Deezer, Tidal, Soundcloud, Udemy, Vimeo, Lynda, etc.

Therefore, if you are searching for the best software to download movies and music, look no further than Allavsoft. You will be able to download high-quality movies, videos, music, etc. without having to worry about converting the videos into the required format.

Allavsoft is an incredible and highly effective video and music downloading software available for both Windows and macOS that enables downloading videos, music videos, playlists, lectures, videos, and other free media from various popular video-sharing websites.

Allavsoft is simple, yet the most powerful tool that has been specifically designed to work on Windows-based computers. However, it supports macOS too so you don’t need to worry about it.

You can use it even if you don’t know any video conversion programs. Unlike other video downloading software programs, Allavsoft video converter does not require installation of any additional software or applications

Which means you can use the software on your home computer without spending more money for other software to convert videos or music since Allavsoft has everything you need to get started with it.

In this Allavsoft review, we’ll see why it is the best downloading software for videos and music.

Everyone loves to save the files (such as Videos/Music) that they liked the most. However, the majority gets ends up getting failed because of downloading the wrong software and eventually get trapped into viruses.

Allavsoft is the best video downloader having no virus issues, created by professional video editors that have combined several different features to make it highly effective.

One of its most useful features is the ability to convert videos in various formats such as AVI, MPG, WMV, MMS, WMV HD, MP4, FLV, and many others.

The video downloader also allows you to download various types of media files from a variety of video hosting websites. These include video clips, music clips, movie clips, voiceovers, podcasts, and much more.

Either you’re a Windows or a Mac user, Allavsoft works well with both operating systems which is again a great thing to consider.

The software is quite user-friendly and there is no reason that you should have trouble using it. Once you have downloaded, you can test the software with its free trial that has limitations for downloading/converting videos.

If you like the software, you can buy the license to remove limitations.

Allavsoft has some unique and premium benefits that they provide to its users. Some of the highly known features are as follows:

Batch Video/Music Downloading Want to download all videos or music files at once? Don’t worry! Allavsoft has got you covered. You can batch download video, music files, and subtitles from YouTube, Spotify, Vimeo, Lynda, Udemy, Soundcloud, Facebook, and more than 1000+ other video sharing websites.

A good thing about this software is that when downloading web video files, it will automatically detect advertisements and do not download them.

Allavsoft has the ability to convert videos in various formats such as AVI, MPG, WMV, MMS, WMV HD, MP4, FLV, DVD, CD, Blu-Ray, and many others.

Moreover, there is a built-in video player in Allavsoft to preview and playback the downloaded video files.

Resume Capability For any reason, if you want to restart or shutdown the PC/Laptop, you can simply pause the downloading and can resume it whenever you want. This is quite an amazing feature of Allavsoft.

It also works to download music from Tidal to FLAC or MP3.