What is Able2Extract Professional?

Able2Extract Professional is a secure, reliable, cross-platform PDF solution for all PDF related tasks in your workflow that saves time and increases productivity.

This PDF suite contains UI and OCR conversion support for French, Spanish and German languages. Users can easily interact with PDF documents in a streamlined ribbon-style toolbar. Users are able to work in either Light and Dark mode. In addtion, the Start Page allows users to quickly get set up with recent files, customization options, and tutorials. Users can batch create PDFs. It is also possible to batch merge PDFs into a single PDF file or batch merge converted results into a single output file. Documents can even be split into even parts. Table headers, footers and text splitting options can be set for individual tables during custom PDF to Excel conversions for even more refined output results.

Other features include the ability to fill in PDF forms, create and edit interactive PDFs forms, insert Bates numbering and redact PDF. Add, delete, and format PDF content or modify PDF files by merging and splitting PDFs. Users can insert electronic and digital signatures to PDFs and authenticate digital certificates, as well.

I still have Able2Extract Pro 12 for Ubuntu, and it keeps on working.

It is a very good software, it can create and edit PDF files, but also merge and split them. Converting PDF files to office formats is also possible.

I only ran into a problem that some scanned documents which were saved as TIFF could not be opened. But opening them in an image editing programme and saving them again did the trick, and Able2Extract could load them.

Version 16, which I tried out, has a nicer user interface and looks more modern.

If you need a software that accurately converts PDF data to Word and Excel, it doesn't get much better than Able2Extract Professional. Two thumbs up!

The best PDF to Excel converter 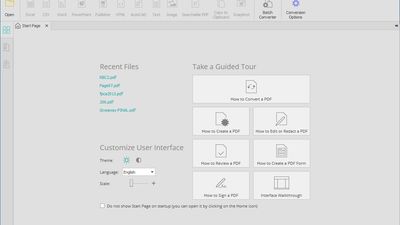 Our users have written 3 comments and reviews about Able2Extract Professional, and it has gotten 14 likes