XXCOPY is a boldly extended XCOPY . First there was COPY, then came XCOPY. Now with the exploding number of files, everyone needs a tool like XXCOPY. Create a powerful backup batch script using XXCOPY.
Show full description ▾

After the passing of Pixelab's director and operator, the company ceased business operations in March 2017. The development and support of its products, including Datman, XXCopy, and XXClone, has been discontinued. Last free version of XXCopy, 3.33.3, released in October 2016, can be still downloaded from the Wayback Machine. 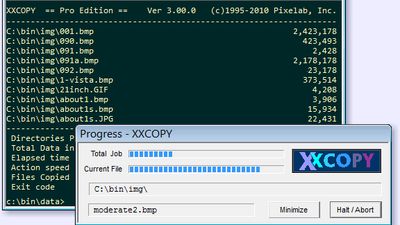 Our users have written 0 comments and reviews about XXCopy, and it has gotten 1 likes