WinSetupFromUSB is a Windows program, which prepares multiboot USB flash or fixed disk to install any Windows versions since 2000/XP, boot various Linux and *BSD flavors, as well as many Windows, Linux, DOS based and other utilities. Since version 1.1 program can create USB disk with Windows versions which support (U)EFI (Vista x64 SP1 and later x64 versions), which USB disk can be used in both (U)EFI and Legacy BIOS modes.

What can be added to the USB disk using WinSetupFromUSB:

Multiple sets of Windows setup files- XP, 2000, 2003, Vista, WIndows 7, Server 2008, Windows 8, Server 2012, both 32 and 64 bit versions are supported. As of version 1.1 program allows to create a USB disk which can boot both in BIOS and (U)EFI mode.
Multiple WinPE2 (Vista and above) based sources from ISO files such as Windows Defender Offline, recent Norton Ghost versions and PE (preinstallation environment) based PC manufacturers recovery disks.
Single WinPE1 source, such as BartPE, UBCD4Win, LiveXP and similar WinBuilder projects, WinFLPC etc.
Multiple Linux-based distributions and utilities from ISO files- Debian, Ubuntu, Fedora, CentOS to name a few, this includes most Antivirus Rescue Disks
Many other ISO images as long as they are compatible with grub4dos CD emulation, such as Ultimate Boot CD, most DOS based utilities, Acronis and Paragon boot disks and so on
Syslinux boot menu and optionally single source which uses Syslinux or Isolinux as boot loader
Show full description ▾

Ok first of all, I am giving it 5 stars for a very specific reason. Unlike all the other alternatives, this actually worked on the quite old Intel T3100 I have been trying for days to make it work with a multiboot usb creator.

-Edit-
I wanted to point out something I found out. The reason WinSetupFromUSB seems to not have had a problem, is because it is probably not based on grub2, like Ventoy. The old PC's BIOS was probably getting stuck because it could not recognize grub2. In the end I did remedy that, firstly by disabling in BIOS the detection of USB Mass Storage devices and then by using through a CD with Plop Boot Manager, which let me use Ventoy. Nonetheless, my point for WInSetupFrom USB still stands, as it is a Multiboot USB creator that can boot even in such rare cases.
-End of Edit-

I personally love Ventoy, as it feels like the easiest and simplest solution for multiusb creation, plus it has worked on every machine.. except this one.

I kept trying to check every multiusb solution, mostly cause it felt there must be a specific reason Rufus could make a bootable USB for this old PC, but no multiboot usb creator.

This is the second last in the list that I was going to try and I was mostly ignoring it cause it is called WinSetupFromUSB, while I wanted to make a mixed Win/Linux one.

Works with many unusual PC boot scenarios, old and new. The workarounds included are not to be found in any other similar utility. Highly recommended.

Just wanted to no if its easy use

It just works, creates multiboot USB drives like a charm.

It is my favorite multiboot creator, but I see it has not been updated since 2017.

other alternatives I like:
AIOBoot
Sardu Pro ($$)
Easy2Boot (for non-uefi; for uefi, it requires extra steps)
Yumi

It is a multiboot creator. The other options do not include multiboot. Also, it supports both Uefi and legacy modes, Windows, and Linux.

That's a bold assertion you make there, "Guest"; baseless and absolutely untrue - but very bold, nevertheless! :))

The most powerful multi-boot USB creator, bundled with a Virtual Machine to immediately (without rebooting) test the USB drive, handles all types of boots (Windows setup, ISOLinux, BartPE and more).
Uses the excellent grub boot loader for the best flexibility around.
Oh! and bundled with great MBR tools.

Reply written about 6 years ago 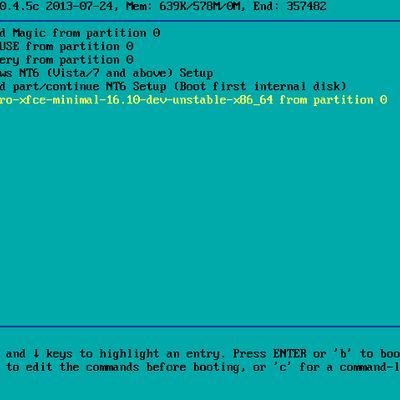 Our users have written 7 comments and reviews about WinSetupFromUSB, and it has gotten 48 likes